Why are so many of the women of the borough of Cambridge past not celebrated and remembered?

I’m in the process of doing some research on Daisy Hopkins, a life-long resident in and around Cambridge who at the age of 17 changed the history of our city – or town as it was then. 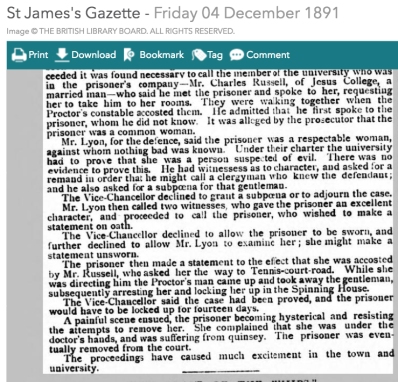 From the British Newspaper Archive

Up until Daisy got the law changed in 1891, Cambridge University Proctors and Constables had significant powers over everyone in Cambridge. These included throwing women into the hated spinning house if they were merely suspected of soliciting. This is what happened to Daisy Hopkins – accused by proctors of doing just that even though she said someone had simply stopped to ask for directions. Such was the uproar on the behaviour of the University of Cambridge that the case ended up in court – with the court ruling for Ms Hopkins. 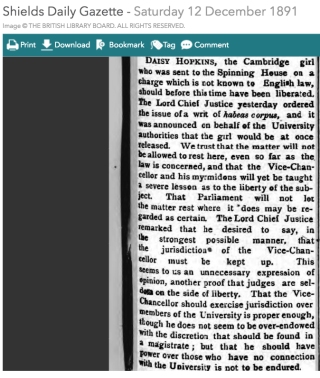 Not all newspapers were on the side of Daisy Hopkins – the Manchester Courier:

The language speaks volumes – undergraduates being ‘youths’ rather than adults as most of them would have been. That plus needing protection from undesirable women – but not men (given the regular fights in town between town & gown at the time). The Derby Telegraph is one newspaper of the day that asked why the university authorities took no action against the undergraduate concerned. 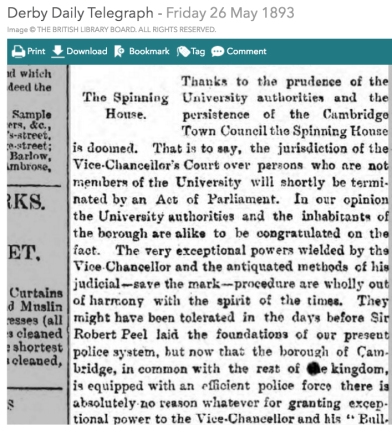 Interestingly, Daisy ended up living a very long life – she died in 1957. It looks like from that site that she stayed local throughout her life. But why do so few people know about her?

Think about what would have happened had she not fought the system. For decades longer, women would not have had the freedom to walk the streets of the centre of Cambridge. The townsfolk may well have had to wait until the securing of women’s suffrage for those powers to have been overturned. What impact would that delay have had on the otherwise growing dance hall and entertainment scene in Cambridge, by which after the First World War really started buzzing with halls, cinemas and theatres opening up.

As I wrote in a previous blogpost, if Cambridge gets its rumoured new large entertainment venue we should name it after Daisy Hopkins because the history of night life and entertainment in our city could have been very different if it were not for the actions of a very brave & courageous teenager.

This is about the case of Petica Robertson and Lucy Gent – two courageous heroes of our city who died during the bombings of Cambridge in the Second World War. I made a video about them.

Their surnames and initials are inscribed on two war memorials along with other people from Cambridge who lost their lives whether as soldiers or as civilians, but there’s nothing I can find about Petica and Lucy as brave civilians who stayed out in order to get people into air raid shelters during one of the larger bombing raids on our city. When I went for a look inside the Cambridgeshire County Archives I found this cold, sober note below.

They were two of the 31 people killed in Cambridge by nazi air raids during the Second World War. Over 70 were injured and over 1,500 bombs and munitions were dropped on our city. I went into the county archives and found the official log book for Cambridge – every borough has one of these in their archives. Have a look at the screenshots the archivists kindly gave me permission to take. 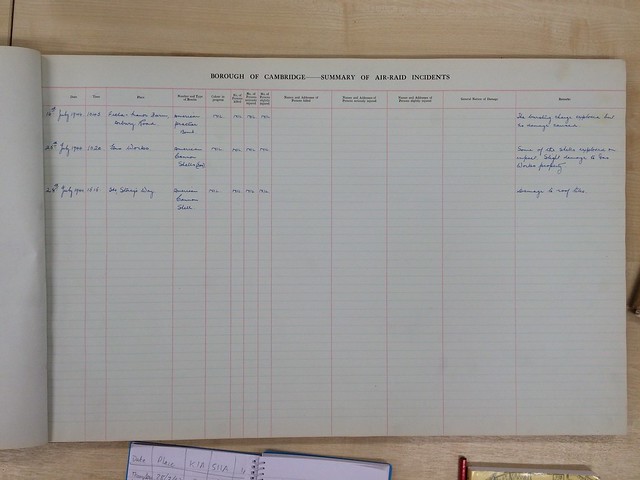 There are many others that I would like to find and identify – a project with the Museum of Cambridge perhaps? Then we can put up some nice paintings and portraits of the women who helped change the history of Cambridge.

[Updated to add]: Via Hilary Cox of the Museum of Cambridge, see http://www.cam.ac.uk/research/news/what-cambridge-women-did-for-us