How much of what Professor Holford recommended did we get?

First of all, a ****big thank you**** to those of you who have donated to my crowd-funding page to support my filming, reporting and research on all things Cambridge.

My friend Sam Smith very kindly gave me an original copy of the Holford-Wright report on “Cambridge planning proposals”. The maps below which I photographed on a DSLR camera are below and in this photoset. 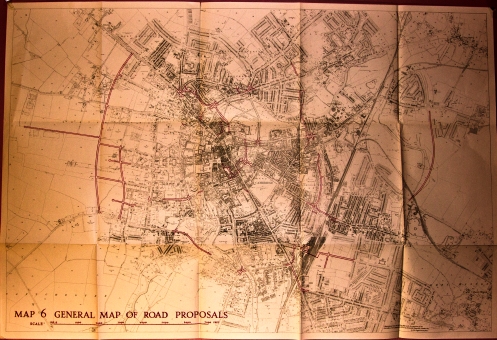 There were a number of pieces that jumped out at me when I read through the first part of the report last night.

Cycle parking has been an issue in our city since before the Second World War. If it wasn’t, Prof Holford wouldn’t be recommending the widespread inclusion of cycle parking in new developments. Note his recommendation on visiting the The Netherlands – a tradition continued by the Cambridge Cycling Campaign should you be interested.

If you look at many of the developments in Queen Edith’s ward, a classic post-war housing area, you’ll notice how almost every house has off-street car parking. Compare that to the roads off Mill Road. It’s easy to forget that when pre-First World War housing was built, there was no need for widespread off-street-horse-and-cart parking for residents. (For firms it was of course different). 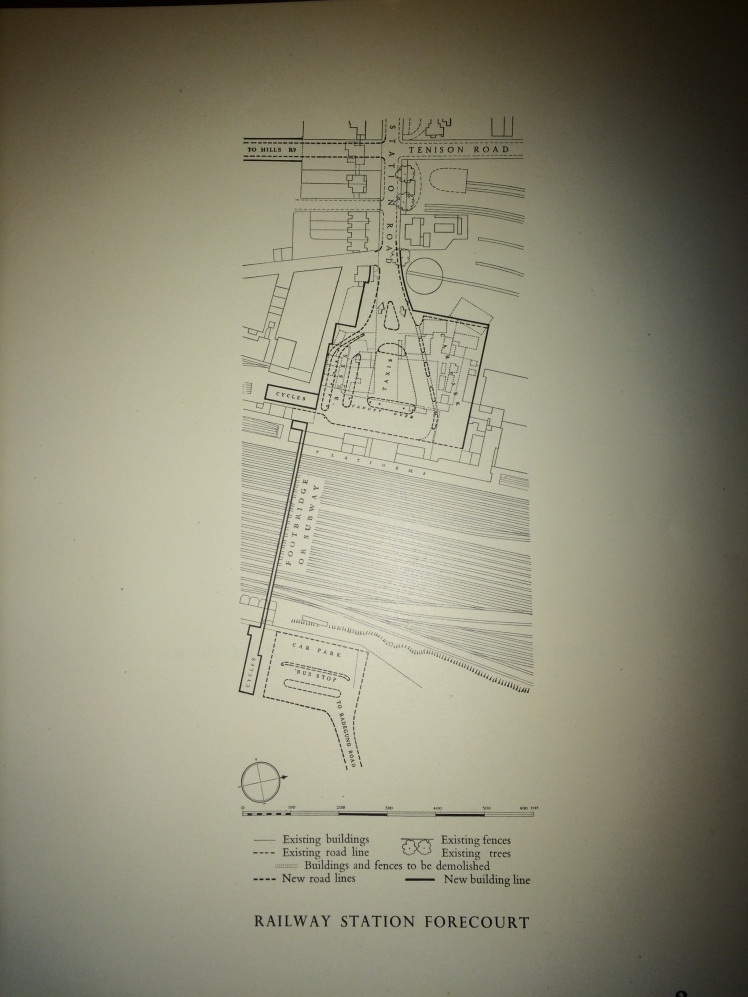 The above was the plan for the new forecourt.

Note the plans for improved access – including a link via footbridge or tunnel to Rustat Road through to Radegund Road. This remains an ongoing issue even to this day – the lack of access to the railway station from the East. The problem now is that all of the land that links the station to Rustat Road has now been built on. No provision was made by developers to hold aside any land for such infrastructure given that the land had such a high value for flats for London commuters. It remains to be seen if any redevelopment of Clifton Road will allow for a new eastern link to the railway station. If not, the chance to build one is probably gone for the next 100 years.

The missing link between Barnwell Road in the East and Milton Road/King’s Hedges Road in the north? Have a look below.

The single thick straight black line going  SW-NE is the railway, with associated lines branching off. You can see the station in the bottom-left corner. Note the thick red line right-of-centre. That’s Barnwell Road linking where the big Sainsbury’s now is (the red box marked W.D. – where the city dump used to be), and note how the plan was to have that road extending across Newmarket Road, over the old Cambridge Mildenhall railway line, crossing Stourbridge Common and the Cambridge-Ely main line just before the railway bridge over the river before swinging round to link ultimately to King’s Hedges Road.

Part of me can’t help but think that such a route would have made access from my part of town (Cherry Hinton/Coleridge/Queen Edith’s) in the south/east of Cambridge through to the north/west where Cambridge Regional College is, much much easier. That said, the Friends of Stoubridge Common & Ditton Fields would have had a lot to say about such a plan. Hence the light rail plans by Cambridge Connect getting my interest.

There are many more nuggets inside the report, which I’ll save for future posts. But those are the ones that stand out for now.