I’ve written lots about the Cambridge Guildhall in Market Square – reflecting the controversy of how to accommodate the ever growing demands of central government to provide public services prior to the massive overhaul that Clement Attlee’s Labour Government would bring in following World War 2.

The principle to remember up until the Second World War – and even more so up to the First World War, was that Central Government was relatively small. It was the job of local government and charities to deliver public services. The concept of large, centralised bureaucracies that we are familiar with today was simply not a thing before the First World War.

I began my professional career in the civil service, and became familiar very quickly of the strengths and weaknesses of having centralised agencies running things with a direct line of accountability to ministers rather than to local councils. So part of the history of Cambridge the town is figuring out under which pieces of legislation local councils were empowered to provide which services (and the powers to increase local taxes for that purpose), and which were the pieces of legislation that took powers, functions and funding away.

He didn’t appear to have done much for the town, but it was with much pride within Liberal Cambridge that the town returned its first Liberal MP in modern times – Stanley Buckmaster KC. 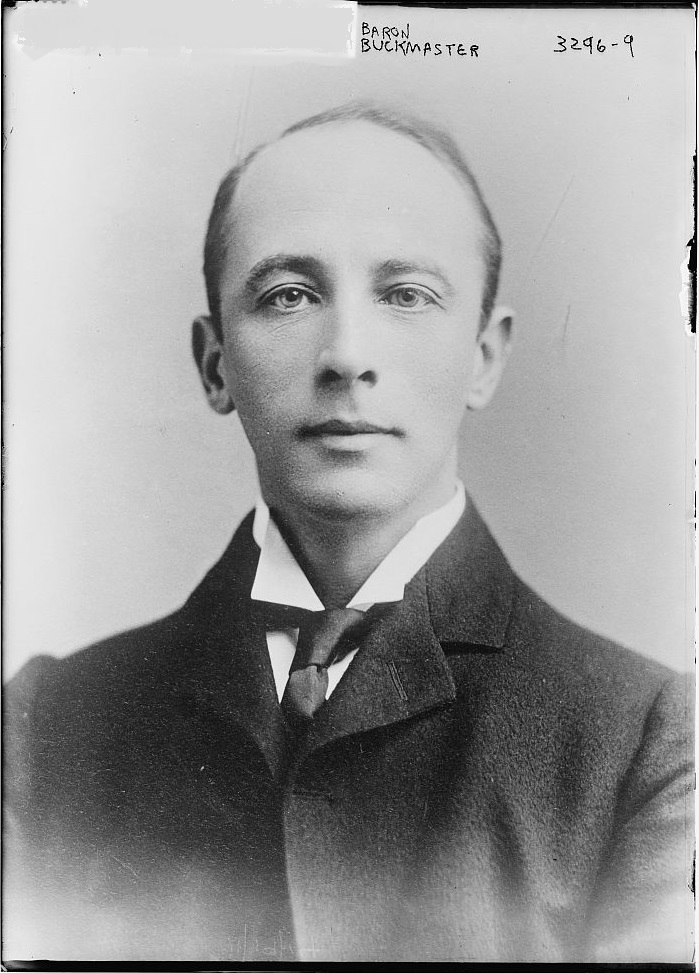 As the article from 1908 will describe, the functions of local government were also increasing. Back in those days, the *administrative boundaries* of the county council and of the borough council were very different to what they are today.

‘Can we have our unbuilt guildhall design by Belcher done please?’ 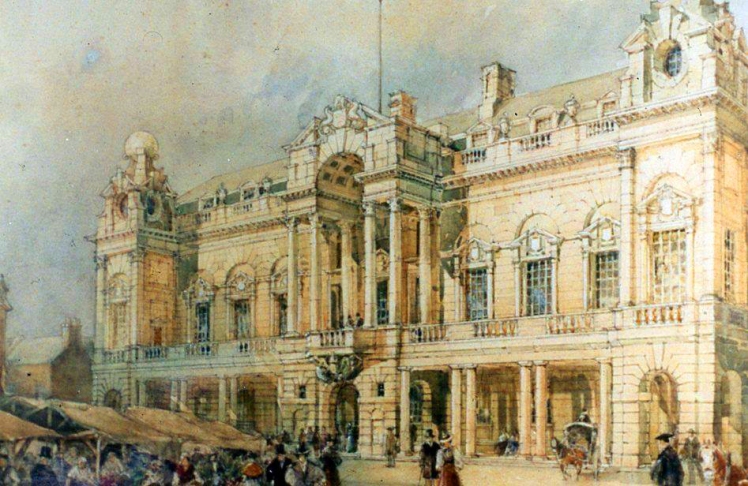 The piece below tries to make the case that the plans – then only ten years old, could be brought back and delivered. The simple reason being that Belcher had done such a comprehensively splendid job of anticipating future demands that he built enough office space into his plans to accommodate some of the county council’s functions. You can see an outline of the plans here, but I need to get them properly drawn up so you can read the room labels. This article is transcribed from the British Newspaper Archive here.

“The question of new municipal buildings is beginning to press itself both upon the Cambs. County Council and the Cambridge Town Council, though much more on the former than on the latter. The reason is the great extension of municipal work. Parliament is every year laying new tasks upon local bodies.

“In 1902 came education, the greatest task of all. To the ordinary instruction there is now being added medical inspection. When Mr. Burns’ Housing Bill becomes law, it will probably be found that the County Councils have been brought into much closer connexion with the general health of the community than they are now. Health and medical inspection of children mean a staff, small it may be, but still requiring local habitation. The Allotments and Small Holdings Committee is gradually extending its operations.

“The Cambs. County Council at its last meeting sanctioned the appointment of a Land Steward, and he must have some place where he can be found, Then an entirely new Committee has been set up within the last few weeks, both in town and county—the Old Age Pensions Committee. Certain officers of the Inland Revenue have been assigned for this work, but they, too, will have to be accommodated somewhere.

“Finally, an alteration is now in force whereby certain licence duties are collected directly by the County Councils, instead of being collected by the Inland Revenue, sent up to the Imperial Exchequer, and then sent back to the localities again. In this case, again, an additional staff is required, and must be housed.

“The most important addition to the work of the Town Council is still to come. It seems to be agreed that Boards of Guardians are doomed by the report of the Poor Law Commission, and will, before long, cease to exist. If this is true, and the Town Council becomes the Poor Law Authority, it will naturally wish to do all its work from one centre, and there will be demand for much more space.

“As for the existing accommodation, the County Council is the worst off. It has j not room enough, and what offices it has are not very convenient, being noisy, owing to their nearness to busy street. The Town Council will have some additional space its disposal as soon as the School of Arts and Crafts migrates to its new building on Mill-road, and leave the existing School of Art vacant.

“Under these circumstances, it need not surprise anyone that there is an idea afloat that the County Council had better build for itself. There is room on the Mill-road site, if the sanction of the Board of Education can be obtained. The Board may say that the whole the ground must be retained for recreation purposes, but that would be to take an extreme view.

“What is likely to prove a more serious obstacle is the cost. If the County Council builds at all, it would build a Council Chamber, beside all the necessary offices. Then the Mill-road site is away from the centre of the town, where are be found the ordinary places of refreshment. It would therefore be necessary to make some provision for the creature comforts of the Councillors, though there would be no lack of cooks in the neighbourhood so long as the cookery classes were being held at the Girls’ School.

Taking all these things into account, the cost might approximate to £10,000, and there is a doubt whether a Council, returned on the economy ticket would spend that amount. There is limited amount of space available next the Free Library, but it is not enough for the requirements of the County Council.

“We venture therefore to suggest that , the time has come when the plan of re-building the Guildhall front may profitably be re-discussed. The project was mooted eleven years ago by Mr. Horace Darwin, when he was Mayor, and he handed it on to his successor, Mr. Ginn, who warmly supported it- Mr. Belcher’s plans, procured by Mr. Darwin, are in existence, and they might be studied again in view of the changed circumstances.

“The rateable value of the Borough has gone up some £80,000 in the eleven years, so that the burden on the rates would be appreciably lighter. The County Council would doubtless be willing to pay fair rent for increased accommodation; two municipal bodies of great and growing importance would be adequately housed, and the town would be delivered from what can only be considered a hideous blot in the midst of so much that is beautiful.” 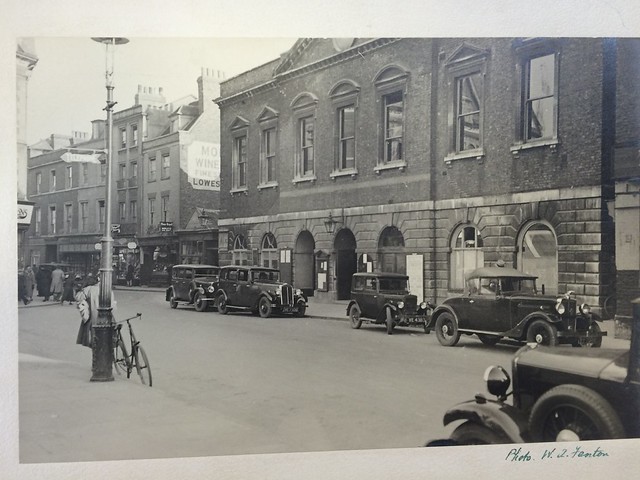 The old guildhall front, slammed by the 1908 article as ‘hideous’. 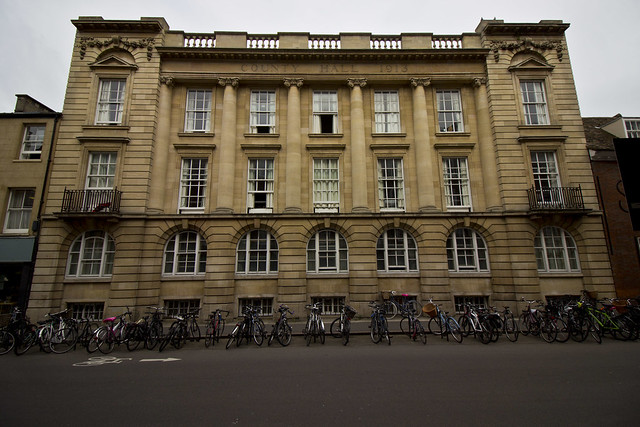 We got this one instead on Hobson Street. Or from a different perspective… 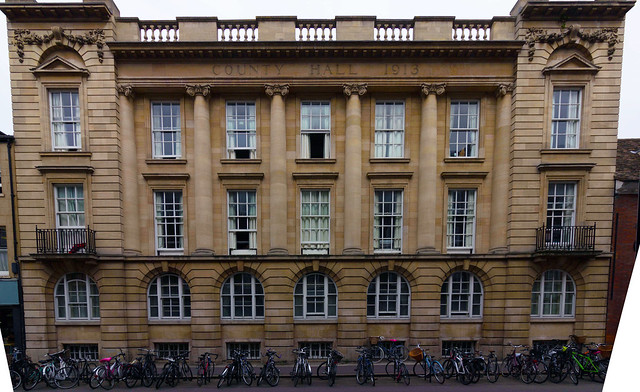 It’s since been incorporated into Christ’s College.