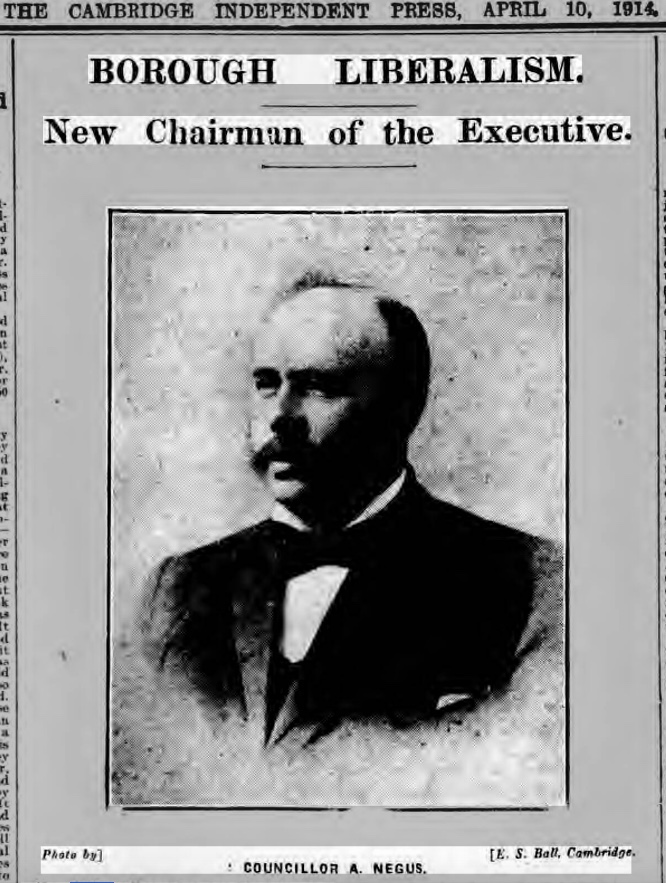 “New Chairman of the Executive

“As stated in last week’s Cambridge Independent Press, Professor J. S. Reid, the new President, will preside at the big public meetings held from time to time, but the work of organisation will devolve upon Mr Negus. Mr Negus is one of the oldest Liberal worker in Cambridge. He has resided in the Borough for something like forty years, and his connection with the Liberal Association dates back about 35 years. The first election he took part in was 1880, when Cambridge returned two Liberal Members, Messrs. Fowler and Shield. Those were the days of the old Reform Club in Green Street. Mr Negus has been on the Executive for nearly twenty years, and has served vice-president for a considerable period. In municipal work Mr Negus has taken very keen and active interest for many years past.

“He was first elected tor Romsey Ward in a by-election in December. 1897. and has represented the ward ever since.

Above – an election advert from 1899 from Arthur Negus

“In sixteen years has only had to fight three contests, but each time he was opposed he was returned an increased majority, showing the confidence felt in him the electors of that ward. During the time he has been on the council he has served on many committees, among others, the Paving and Drainage, Sewage Disposal, Town Planning, Plans, Fulbourn Asylum Board. Old Age Pensions, and Education. On the Education Committee he has done good work as Chairman of the Finance and Buildings Sub-Committee, and he has also served on the Hygiene Sub-Committee.

“In addition, he has been a Governor of the County Boys’ School [today, Hills Road Sixth Form College], and one of the Managers of the Romsey Council School since it was opened [today, now the Ridgefield Primary School]. Mr Negus is a staunch Nonconformist, and the present time is one of the deacons of the Emmanuel Congregational Church. [Today, the Emmanuel United Reformed Church on Trumpington Street].”

The newspaper archives are also full of entries for the above-named firm. Adverts for electrical lighting, internal furnishings such as wallpaper, light machinery and building services feature throughout. The company is listed as having built amongst other things, the Chesterton New Schools – later Milton Road Primary School. 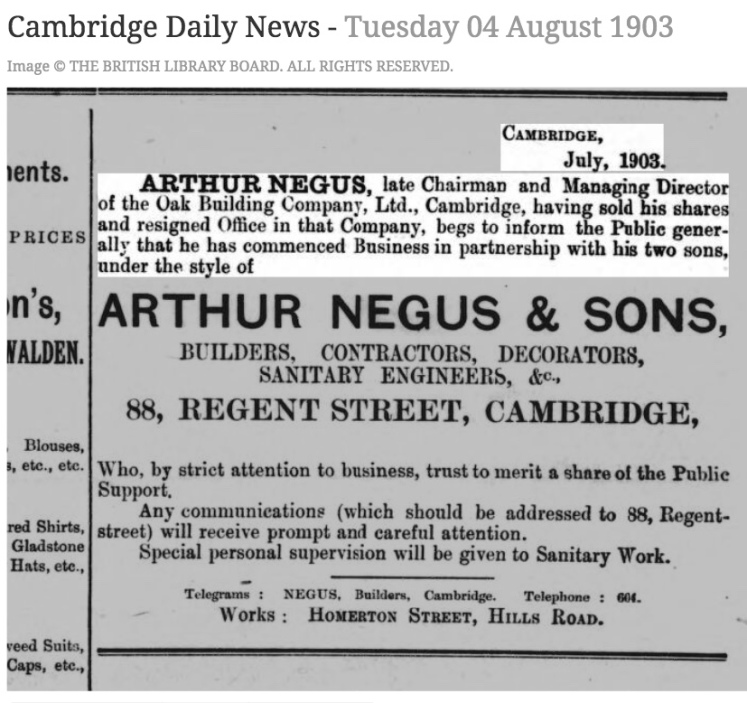 He also had premises at 52 Regent Street which appear to be his shop front – that and the Homerton Street premises long since demolished. At the time, Regent Street looked something like the photo below.

Regent Street before the construction of the new offices by Downing College. The spire – since removed, is that of St Andrew’s Street Baptist Church – the one with all the flints and pebbles on it.

Arthur Negus is also listed as having premises at 88 Regent Street – the property still in existence, in a listing stating that he was the only candidate for Romsey Ward – which was a couple of doors down from the Cambridge Charitable Society Organisation where Florence Ada Keynes, Eglantyne Jebb and company were busy working for the town’s poor.