One of the most historic of Cambridge town’s landmarks will become the site of a new private student halls of residence targeting the lucrative ‘cram college’ and language schools market. A nursery will be created on the ground floor. It’s left a number of locals heartbroken. This article looks back to its glory years.

The speeches by local resident Dr Andy Clarke, and local councillor for Romsey ward, Dr Dave Baigent, speak for themselves.

Dr Baigent commented in this article in the Cambridge Independent with his concerns about the plans.

CGI of the plans by DPA Architects in the Cambridge Independent following rejection of their original application – the lower half in the slightly pinkish colour is the original building. The darker red brick & grey zinc is the new development, along with more student flats in brown/grey behind.

“Patriotism is not enough – only love can save the world”

The famous slogan of the Romsey Labour Club banner displayed proudly above Ramsay MacDonald MP – the first Labour Prime Minister who would later be expelled from the party for forming a coalition government with the Conservatives and some Liberals in the face of the biggest economic recession then in living memory – the Great Depression.

From the Cambridge Daily News in the Cambridgeshire Collection, 21 April 1926. Photo 2) shows Cllr W L (Bill) Briggs, who would become the first Labour councillor to become Mayor of Cambridge, and Cllr Clara Rackham, the Cambridge hero who helped transform our city – from the Votes for Women campaigns through to the CND against nuclear weapons in the 1950s.

The Cambridgeshire Collection in the Cambridge Central Library in Lion Yard has a copy of a book celebrating the Romsey Labour Club’s silver jubilee in 1949. You can find the book reference here. (But you can’t take it out as it’s very rare!) This opening page of the book that summarises the early days of raising money for the land and materials, and the volunteers who worked unpaid to build the club. This was in the days when Romsey was very much an industrial working class community, with local residents working on the railways, at the cement works and in the building trades, as well as in the shops along Mill Road.

At the opening ceremony of the club, one of Labour’s rising stars was invited to open the building. Dr Hugh Dalton at the time was the MP for Peckham. However, he had spent many years in Cambridge after arriving from Eton before the First World War. One of his closest friends from his university years was Sir Geoffrey Keynes – younger brother of the economist John Maynard Keynes, and son of Florence Ada Keynes – at the time a town councillor on Cambridge Borough Council. (We weren’t to become a city until 1951). Another very close friend of his was the poet Rupert Brooke. The two were political soulmates, and in Dalton’s memoirs he wrote that had Brooke survived the war, he’d have ended up in the Labour Party, as being on the radical left wing of the Liberals, many abandoned Asquith and Lloyd George for the new Labour Party. Virgina Woolf, the author, said the same thing.

Rupert Brooke was also active in the 1910 general elections – just like that other Cambridge hero, Eglantyne Jebb. This is what Brooke had to say about the Conservatives.

“I HATE the upper classes” Local (to Puffles) poet Rupert Brooke campaigning against the Tories in the general elections of 1910. pic.twitter.com/YXm55Kjnrn

So when a statue was unveiled by The Archers in Grantchester several years ago, the choice of individual to unveil the said statue was…interesting.

“That would have been wonderful – Hugh Dalton, Rupert Brooke, and Virgina Woolf opening the Romsey Labour Club!”

But it wasn’t to be. Dalton survived the First World War, serving as an artillery officer mainly on the Italian front fighting the Austrians. (which he wrote about in this book – Italy was an ally of the UK in the First World War, having been promised territory in the Balkans at the expense of the Austro-Hungarian Empire).

The reason why Dalton matters is because Dalton had just been appointed a junior minister at the Foreign Office – short lived as he’d lose his seat two years later (before regaining it in 1935 – in Bishop Auckland). When Churchill became Prime Minister in the very dark days of 1940, Dalton, by now one of Clement Attlee’s senior advisers, was appointed to the National Government as Minister for Economic Warfare – with responsibility for the Special Operations Executive. IN 1942 he joined the Cabinet as President of the Board of Trade – like the Business Secretary but much more important and influential back then. When Labour were elected into office in 1945, Dalton became Chancellor of the Exchequer.

Yep – but during the 1920s he was a regular sight in Cambridge, having also been Labour’s prospective parliamentary candidate for Cambridge

From the British Newspaper Archive, from Hugh Dalton’s campaign in Cambridge in the 1920s.

Local school halls were regularly used as venues for political meetings in Cambridge – a number having recently been constructed as with Morley Memorial School in South Cambridge.

“What happened after the Romsey Labour Club was built?”

One woman who is otherwise forgotten in this story was a young academic at Girton College – Miss Helen Cam. At a time when many people in Cambridge were struggling financially, she regularly donated funds towards the construction of the club building.

This is reflected in the evening event following the laying of the stone – noting her presence on the top table. The reason why Helen Cam matters is that she would go onto far greater things:

Professor Helen Cam: The first woman professor appointed to Harvard University in the United States of America, in 1948.

The other reason why Professor Cam matters, is that she was the last person to write a comprehensive history of Cambridge the town.

The histories of the colleges are divided up between the male historians of the time (bar Newnham and Girton), and it seems it was left to Helen to summarise the town’s history in 150 pages. You can read what she wrote here – as her work has been digitised. She also did talks about local history too – this one from 1939 on Addenbrooke’s.

Romsey Labour Club – buzzing with activity – in peace and in war

A popular dancing venue – so popular that they paid for an upgraded dance floor!

From the British Newspaper Archive – that is a ***huge*** junior section.

In wartime, the Romsey Labour Club was a communal feeding centre under the British Restaurant brand. Note The Pitt Club was requisitioned too – the club effectively being stereotyped as Cambridge’s ‘Bullingdon Club’. Before that, the site was a short-lived swimming pool and Roman Bath.

It was a place for public meetings – naturally.

Cambridge had a large anti-war movement at the time – it’s Parliamentary candidate, Dr Alex Wood of Emmanuel College, a Presbyterian minister at St Columbas, a non-drinker, and a physicist from Scotland, being a committed pacifist. The protests in early May 1939 were particularly large. 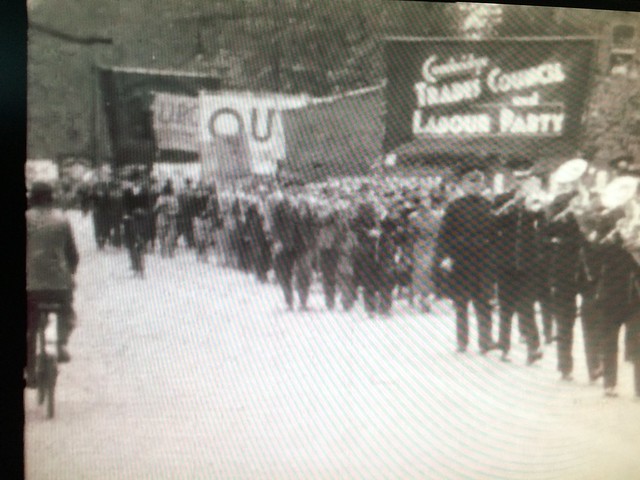 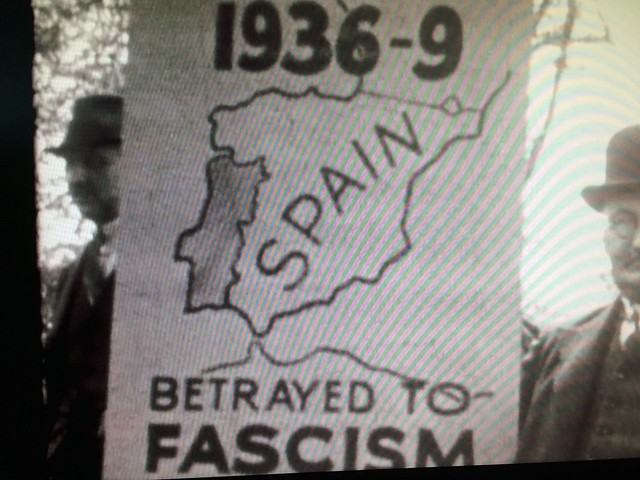 Protestors calling for a popular front against Fascism. Cambridge in May 1939 – from the BFI in the Cambridge Central Library.

Anecdotally I think it was because they were not making ends meet – not enough people were drinking at the bar or using the club. But the story of when it was sold and to whom is one I’ve not yet looked into. Happy to give a guest blog slot for longtime Labour members who were around and can remember what happened.