If we (and I do) want to revamp the big historic hall in order to improve its poor acoustics, it’s worth having a look at its origins. Thanks to the digitisation by the British Newspaper Archive, we now know the origins of our large hall, opened in 1862.

I can’t remember how I stumbled across the headline above, but until yesterday I knew very little about the origins of the large hall on the Guildhall site other than it was possibly the oldest part of the site that still stands.

The guildhall we didn’t get in the late 1850s

The building on the front cover of The Cambridge That Never Was, by F.A. Reeve (Oleander Press, 1976) originally published locally in the late 1850s was drawn up by Peck & Stephens.

…and we didn’t get it. Given the amount of paperwork involved, it’s said that their efforts came to nothing. I’d like to think that the outside of this building could be an inspiration for a new civic building for Cambridge such as my pet project of a new 2,000+ concert hall & conference venue named after Florence Ada Keynes. ( “Florence Hall” if you wish)

The public was invited to have a look at the new designs in late 1895 by the Town Clerk, Mr Cooper.

Charles Cooper wrote possibly the most extensive history of Cambridge the town, finishing up in 1856 with his five-volume Coopers Annals. I’m intimidated just looking at the covers. Fortunately they have been digitised:

…so hopefully some of you will take a look through them, because there are lots of hidden local historical treasures in them. Unfortunately for me Cooper stopped just before the history of Cambridge really started getting interesting as far as modernising the town was concerned.

Mr Cooper by the sounds of things wanted to get a new large hall built for Cambridge as soon as possible. He didn’t hang around when the first scheme was abandoned.

We then got a description a few weeks later.

“The grand room will seat 1200 persons; there will be a gallery at one end, but not at the sides.”

Above – this is the gallery with me and Puffles the Dragon Fairy watching over politicians and council officials counting the votes following the general and local council elections of 2015.

From the outside, you can get a feel for what the hall is like in this photograph from the Museum of Cambridge.

This was taken following a fire and the premises of one of the shops that previously occupied the site. The fire took place a few years after the completion of the large hall. By the mid-1880s, Cambridge legend John Pink, our first public librarian who held the post for half a century, took up residence in the new public library opened in 1884.

Librarian John Pink – from the Friends of Cambridge Central Library

Today, the old library is a celebrity-owned eatery…and the magnificent organ inside the large hall… 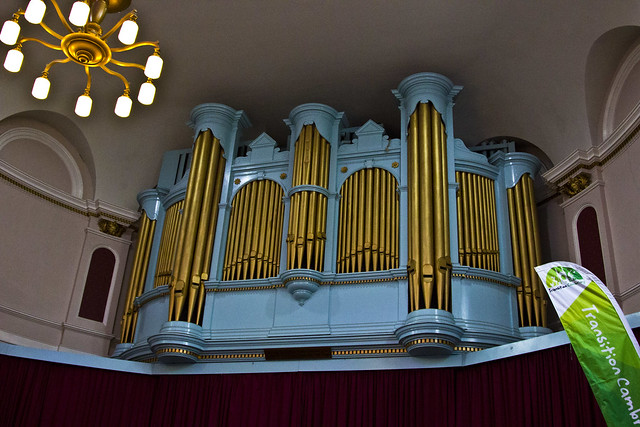 @Puffles2010 @auntysarah @GailMDaisley @CllrRJohnson Not my portfolio. If you've got £0.5m to give away we can fix the organ too.

…and to repair it doesn’t come cheap – the above from former councillor Tim Ward of Cambridge Liberal Democrats. He recalled a figure of £250,000 back in 2000.

But back to the large hall plans, and Rowland Morris Fawcett wrote into the newspapers to announce that building work would be starting in 1860.

“It must have been magnificent when it was all opened”

This was one of the adverts.

Remember this was a time of huge technological change – this being around the time engineers were experimenting with the transatlantic telegraph amongst many other things. Remember the railways had only arrived in Cambridge some 20 years before. Having just returned from the international exhibition in Kensington, the Cambridge Independent wrote this on 10 May 1862.

“With a feeling of exultant triumph, we now turn from the new temple industry in our great metropolis, to the inauguration of our New Town Hall in Cambridge, which was celebrated on Wednesday last, and several following days. It is a building of which our good old town may well be proud; the country participating in the feeling, and our venerable and time-honored (sic) University rejoice at, for the ample and excellent accommodation it will afford, necessary for all claims that may be made upon it, and which was never before possessed either town or county.

What follows is absolutely beautiful – and damning of today’s style of building in Cambridge.

Unlike the building we have just adverted to, the Cambridge New Town Hall is not doomed to curtailment. It will stand, in all its grandeur, for many a century, a monument of public spirit, local and general liberality, and the enterprise of a town and county, that have entered into the production of a building with a cordiality and oneness of feeling most gratifying to record; and worthy of men, who, for the nonce, forgot party spirit, or local distinctions, and devoted themselves ” heart and soul” to give to the town a building that should be worthy of the place, an ornament to be admired, both for beauty and utility, and worthy of the age in which live, and which future generations will recognize with pride and thankfulness, such we ourselves feel towards those ancestors, who, in their time, erected those grand and noble buildings which are so pleasing to the eye, so essential to our comfort and convenience, and which stand, and will for ages to come stand, as mementos of past greatness and architectural skill.

Can anyone name any brand new buildings constructed in the last decade-and-a-half in/around Cambridge that would have people describing them in similar words? The only one I can think of off the top of my head is the new Papworth Hospital.

“It is the fashion of Englishmen, and no doubt the fashion the denizens of other countries, to celebrate great events in public manner worthy the occasion. It was felt, therefore, to be a public duty to celebrate the inauguration of the Hall in a manner befitting the occasion. For the accomplishment of this purpose, have all respects been most fortunate.

We have a Mayor possesses great wealth, of indefatigable business habits, of high standing in the town and county, and whose generosity appears to know bounds; he has evinced a deep interest in the progress the building; and the Town hall Committee, not confined to the members of the Corporation, but an admixture of the Council and gentlemen who do not form part of the Municipal body, have, to eminent degree, acquitted themselves in a manner most creditable, and have consequently won the golden opinions of their fellow-townsmen, who heartily thank them for the perseverance, energy, and ability they have displayed throughout the progress of the gigantic undertaking : nor must omit to mention the untiring and discreet exertions of Mr. R. M. Fawcett, through whom, principally, the whole affair has been brought to so excellent a termination.”

How many of us (myself included) in this day and age in Cambridge could possibly meet the description of the people described above in getting the large hall built? When was the last time Cambridge had a substantial civic and public facility built that town, gown and villages – the people who make up our great city, can collectively be proud of? Or is the structure of our economy as such that the incentives for firms are too skewed to making money at the expense of the people?

“Everything seems to have conspired to give ‘eclat’ to the proceedings. Wednesday was the day fixed for the inauguration the Duke of Devonshire as High Steward of the borough. The weather was all that could be desired. The event had for several months been anticipated with the greatest interest. The invitations issued by the Mayor were very numerous, and perfectly irrespective of class or politics; and the town at large appeared gaiety itself.”

I’ll leave the transcripts of the speeches and attendee list for a further blogpost.

Cambridge in 2050 – what would the city look like if we restarted the tradition of civic pride in our planning & building?

I wrote about it in My Cambridge 2050 – a revamped Guildhall, a new castle and a rebuilt shire court house on Castle Hill to house an expanded Museum of Cambridge, a new concert hall named after Florence Ada Keynes, a new country park in East Cambridge with the lakes that are already there named after some of our most prominent women in our town’s history, a new legal quarter, and a new light rail underground public transport system.

Can I see it happening? Not at the moment – and certainly not in my lifetime. But then, as with the large hall in the guildhall, someone had to have a dream in the first place in order for the hall to be built. Dreaming’s the easy bit. Delivering it…now that’s the challenge. Cambridge has the resources and the talent. But do we collectively have the desire and drive to make it happen?

One thought on “The opening of the large hall at The Cambridge Guildhall site, May 1862”