On why this amazingly talented, courageous and hard-working woman is an inspiration and an example to all of us in Cambridge – whether town, gown or village.

A photograph of a young Florence Ada Keynes in the latter part of the 1800s, from the Cambridgeshire Collection

“Learn her name, recognise her face, be inspired by her example and match her impact”

The more I read about Florence, the more I admire her for what she did for Cambridge and for the civic example she set to all of us. I’m also surprised that she wasn’t honoured by the state in her own right in the way her more famous son, the founding father of macroeconomics, John Maynard Keynes was. (He became a peer).

The Museum of Cambridge’s short, sharp summary of Cllr Keynes

Local historian Tamsin Wilmhurst from the David Parr House put this and other boards together for a display several years ago. She was also part of the Cambridge Women at Work project with Drs Lucy Delap and Phil Howell. I’m currently working up some ideas with the Museum of Cambridge to see how we can bring these out of hibernation again. Over twenty women are featured on boards like this. Please contact the Museum of Cambridge should you wish to borrow them for a future event.

Two other achievements in the above image include:

Note too that her and Eglantyne Jebb – another Cambridge Hero who went on to found Save The Children, were the two people that founded and ran the Cambridge Juvenile Labour Exchange. Yes, Florence and Eglantyne invented job centres before they had even been invented (hence why the local council and then national government took them over) and were also dealing with ‘NEETS’ (young people Not in Education, Employment or Training) before some policy type in the next century came up with the term.

We also know that Florence was a pillar of support for Eglantyne Jebb as she researched and wrote her ground-breaking book: Cambridge – a brief study in social questions. All 200+ pages of it. You can borrow a copy from the Cambridgeshire Collection in the Cambridge Central Library.

Mentor – Eglantyne says ‘Thank you’ to Florence and that other pillar of social and civic action in Cambridge, Mary Paley Marshall. Image Courtesy of the Cambridgeshire Collection.

Mary Paley was a prominent economist in her own right. Here she is in a newspaper article shooting to pieces anyone wanting to cut the wages of those already on low pay back in 1882.

I’d been aware of Cllr Keynes for quite some time, but only as a former civic person and as John Maynard’s mother. I was in the Cambridgeshire Collection in the Cambridge Central Library earlier, and pulled out a couple of screenshots from the Cambridge Chronicle of 15 March 1916.

Above – Florence Ada Keynes by Palmer Clarke from a glass plate negative in the Cambridgeshire Collection, colourised by Nick Harris and commissioned by Antony Carpen. 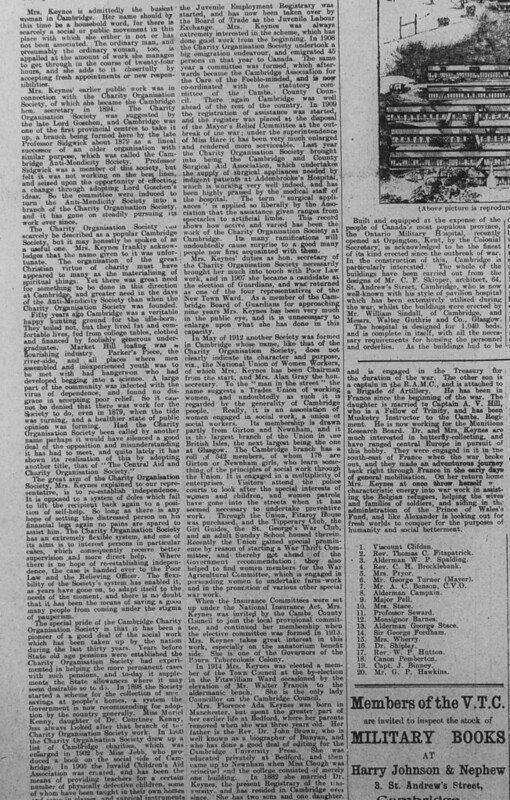 Click on the above screenshot to see the text from the Cambridge Chronicle – courtesy of the Cambridgeshire Collection.

The article is beautifully written. Here are some quotations:

“Mrs Keynes is admittedly the busiest woman in Cambridge. Her name by this time should be a household word for there is scarcely a social or public movement in this place with which she either is not or has not been associated”

“The ordinary man, and presumably the ordinary woman too is appalled at the amount of work she manages in 24 hours, and she adds to it cheerfully, by accepting fresh appointments or new responsibilities”

“In May 1912 the National Union of Women Workers [was formed] of which Mrs Keynes has been chairman from the start…Really it is a union engaged in social work. It’s membership is drawn partly from Girton and Newnham, and it is the largest branch of the union in the British Isles, the next largest being the one at Glasgow. The Cambridge Branch has a role of 542 members of whom 178 are either Girton or Newnham girls.”

That was all before she:

Small and pokey – the uninspiring Shire House next to the ‘Peas Hill’ building that housed the Magistrates Court.

It’s not Belcher’s design as I’d have liked, but the modern day Guildhall (from the British Newspaper archive) has served our city well. We got this because of Cllr Keynes’ work.

Shortly after this building was completed in the late 1930s, Florence Ada Keynes retired from public life. She stayed with us until her death in 1958 at the age of 96. A hero, a powerhouse, a dynamo, and an absolute civic legend.

“What have we named after her?”

This explains why if, against all the odds we get this wonderful concert hall/conferencing facility that I wrote about here – a joint project between Cambridge University, the local councils, local businesses and civic society, we should name it “Florence Hall” after Florence Ada Keynes, because she epitomised bridging the barriers between ‘town and gown’, spoke truth to power, ensured our city got great things and not only looked after, but fought for the poor in our town at a time when there was no welfare state.

Our city’s problems have not gone away. I’d like to think a new generation of activists – in particular young women, can be inspired by the example of Florence and what she achieved for everyone in Cambridge. For if it wasn’t for Cllr Florence Ada Keynes, Cambridge would be a very different place – and not for the better either.