On starting to explore how Newnham College graduates chose to get their hands dirty in local democracy and the provision of public services in Cambridge – and how they and other women heroes of Cambridge shaped today’s city in the process.

And…at the same time I hope this will encourage women of Cambridge whether at our universities or not, to pick up from where our founding mothers left off.

This blogpost follows from an earlier radio interview on BBC Radio Cambridgeshire today (16 Jan 2017) that was about Cambridgeshire Conservatives picking an all-male shortlist for their county mayor candidate, turning down Heidi Allen MP’s application. I blogged about that interview (and how it linked to the Cambridge Heroes) here.

I’ll let Gill Sutherland explain the history here – essentially the college was founded to cater exclusively for women students at a time when women were barred by all of the other colleges that formed Cambridge University.

“Why does Newnham matter to what you’ve described as the founding of modern Cambridge?”

Anecdotally a number of the Cambridge Heroes of the early-mid 20th Century were graduates from Newnham College. There was also an incredibly strong social bond between a number of the campaigners, with marriages across several well-known family names. Let’s look at a number of them.

Florence Ada Keynes was the first woman to be elected to the body we now know as Cambridge City Council. She was also the first woman to be elected as an Alderman, and the third woman to be elected as Mayor of Cambridgeshire. It was as a result of her campaigning that Parliament changed the law to allow women to stand for election to local councils. You may have heard about her philanthropic son, John, who paid for the founding of the Arts Theatre round the back of the Guildhall. Going to the Arts is sort of a local right of passage for the children of Cambridge today. Oh – he also wrote about macroeconomics. (Yes, he was *that* John – Maynard Keynes)

In 1908, before the families were famous, Florence wrote a letter to the Cambridge Independent Press (now reformed and out as a weekly today – well worth a read) inviting women to put their names forward for election.

You’ll note that it was co-signed by Maud Darwin – which makes you wonder if she was related to Charles Darwin. She was his daughter-in-law. Maud’s daughter Margaret would go onto marry Florence’s son, Sir Geoffrey.

Maud campaigned not just for women’s suffrage, but also for the right for women to be police officers. She won. Both.

Annie Carnegie Brown was one of the first female officers employed by Cambridge Borough Police in the 1930s #tbt pic.twitter.com/4xXAO6WpR1

The newspaper archives reveal that Sgt Brown was indeed the first woman to be sworn in as a police officer in Cambridge.

You’ll notice some other notable names in the newspaper clip:

Lady Allbutt – wife of Sir Clifford Allbutt who invented the thermometer, Mary Allan , the first Principal of Homerton College. (The newbuild bit of Homerton College opposite St John’s Church is the Mary Allan Building – which is on the site of the athletics track my old primary school had its sports days on!)

“What about the Newnham Connection?”

There are more names

Looking at the women elected to the council in the early 20th Century we find the likes of Clara Rackham and Florence Ada Keynes, both Newnham graduates who stood for election in Cambridge for the local council in 1919, and both of whom would go onto become councillors. Going through the 1908 letter, we find it’s not just prominent women signing it, but men too.

You can see Sir George Darwin, astronomer and son of Charles having put his name to the call. Note Mr and Mrs Campkin and Mr and Mrs Chivers – both prominent families in Cambridge at the time. Any other names look familiar? Please highlight them in the comments box.

Note Mrs Latham was the onetime Mistress of Girton – a number of Girton graduates also come up. Again, if you spot any other names you’re familiar with, please mention them in the comments. Note Miss Fanny Johnson is mentioned – she was the press secretary of the ***huge*** Cambridge Women’s Suffrage Association. Only in recent days have I begun to realise just how big the association was – by 1913 it was over 500 members.

Miss Philpott is Rosamund Philpott, would would be one of the first women to stand as a candidate for election in the Petersfield ward of Cambridge – a ward that still exists today.

Clara Rackham puts her name to the letter – as does a certain Mrs Sidgwick. The latter, Mrs Sidgwick was a Newnham graduate and was also the sister of Arthur, who was the Prime Minister some three years before. Thus the niece of Lord Salisbury, the last Prime Minister to serve while in the House of Lords, Eleanor was incredibly well-connected politically. The Sturton family get a mention – and interestingly Dr Venn – the man who came up with the Venn diagram. Yes – he was a supporter of votes for women.

Florence Ada Keynes was instrumental in the writing of Eglantyne Jebb’s ground-breaking book Cambridge – a study in social questions. You can read the book online here. (If you are a Cambridge resident, it’s essential reading to understanding how and why Cambridge is as it is today).

This isn’t the only economics link to the book. Mary Paley – Mrs Alfred Marshall (the economist – though note Mary was an economist in her own right) was the first proof-reader of the manuscript of Eglantyne’s book. Oh – and Mary was a Newnham graduate and lecturer too.

Both Mary and Florence were a generation older than Eglantyne, who was 30 at the time she published her book. Mary was 56 and Florence was 45. Both would have been mentors to Eglantyne. Note at the same time, Mary had a very close friendship with Eleanor Sidgwick – brother of ex-Prime Minister Arthur Balfour mentioned above.

What is it that makes all of these women Heroes of Cambridge?

The most tragic thing for me is that we seem to have come to a halt in terms of the progress they made. This is the first woman mayor of Cambridge, Eva Hartree in 1938.

This is Cambridgeshire County Council about a year ago, looking at the mainly Conservative benches. 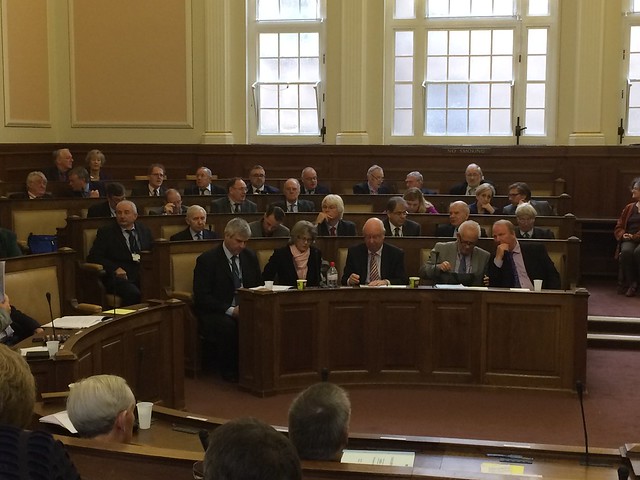 The two images above speak volumes.

I’m on the lookout for the next generation of women to get involved in local democracy and build on the legacy of the women I’ve mentioned above. Given the outcry mentioned on BBC Radio Cambridgeshire today following Heidi Allen MP not making the shortlist for the county mayor, there will be more than a few people willing to support you, whichever party you stand for.