There are a handful of photographs on the internet of Cambridge’s old guildhall dating back from the mid 1700s. 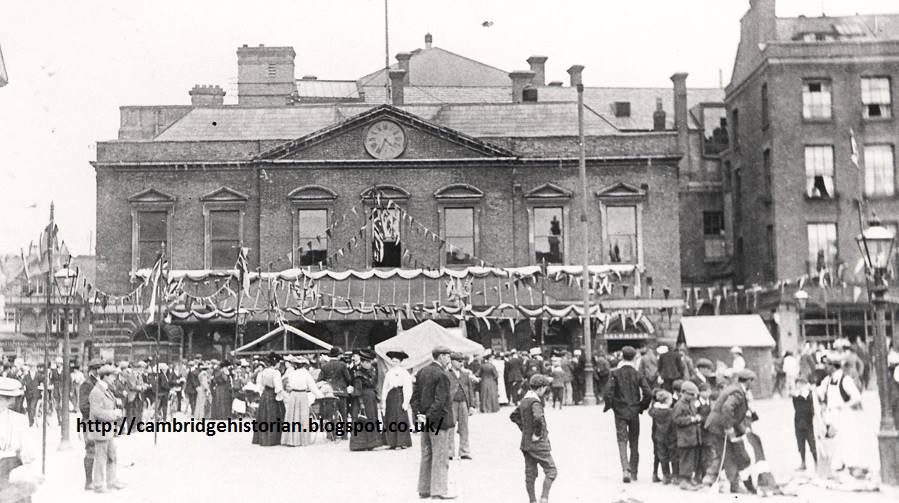 The above image is from Fonz Chamberlain’s excellent website Cambridge Historian and was one of the images that made me curious about why Cambridge didn’t end up with something more grand than the one we have today. With this photograph you can see the top of the roof of the large civic hall behind the front – this hall still stands today. This is the older of two photographs from Fonz’s website, the second being an intriguing one that feels like about a quarter of the current guildhall has been built, but the rest has somewhat been missed out. 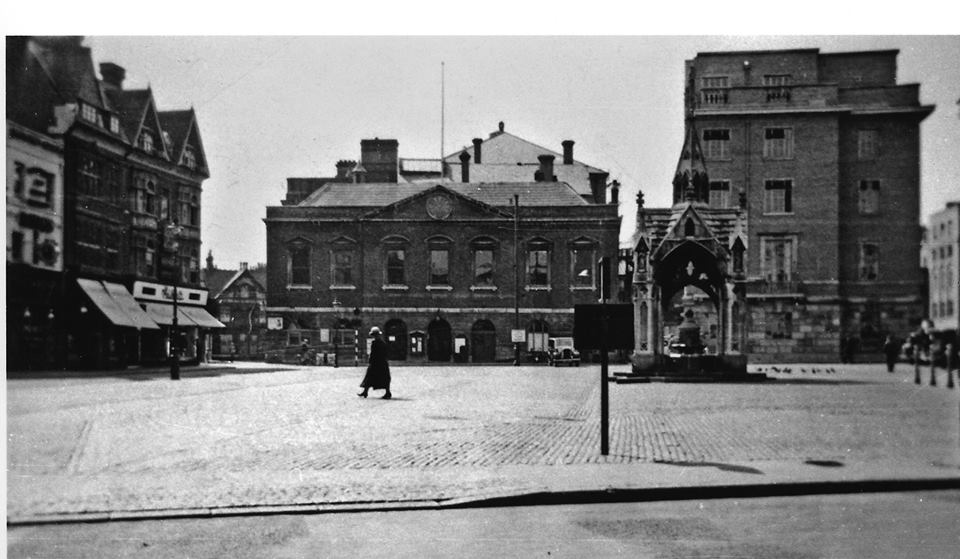 By the mid-1800s, Cambridge like many other towns and cities across the country were in the midst of the industrial revolution. It’s easy to forget just how seismic the shift was for everyone. The closest modern phenomenon we can compare it to is the growth of the internet and social media. As Allan Brigham stated in his talk at ‘Supersize Cambridge’ it was the growth in the Victorian era that was the most significant in our borough’s history.

Looking at the Cambridge census figures, Mr Brigham is right – Cambridge’s population rose from 11,000 in the year 1811 up to 40,000 in 1911. So the earlier guildhall may have been suitable for a market town, but by the mid-1800s when the population was heading towards 30,000 people plans were being made for a new, much more grand guildhall.

The above – the Peck & Stephen design for the Guildhall. It reminds me of a number of buildings in London that I’ve seen build in a similar, grand style. Remember that this was also designed prior to the Cambridge Corn Exchange that dates from the 1870s – and one not without its problems either.

The interesting story behind this guildhall design was that at the same time there were plans for a new concert hall near Magdelene Bridge. The newspapers of 1858 feature the debate between backers of the ‘New music hall and public rooms company ltd” who wanted a 2,000 seat concert hall plus meeting rooms plus double swimming pools, versus ‘The memorialists’ who wanted the above design as a new guildhall. (I’m still looking for illustrations of the former). In the end unfortunately Cambridge got neither – mainly because a protest group, the Cambridge rate payers association, kicked up a fuss over the costs. So in the end Cambridge got neither.

The next two unbuilt designs I’ve stumbled across are this one by WM Fawcett from 1893 via http://archiseek.com/2009/1893-new-municipal-buildings-cambridge-cambridgeshire/

…followed by the most grandest of them all by John Belcher in 1898 below, which attempts to raise the money to fund it were made. See http://archiseek.com/2014/1898-design-guildhall-cambridge/ for the interior sketches too. 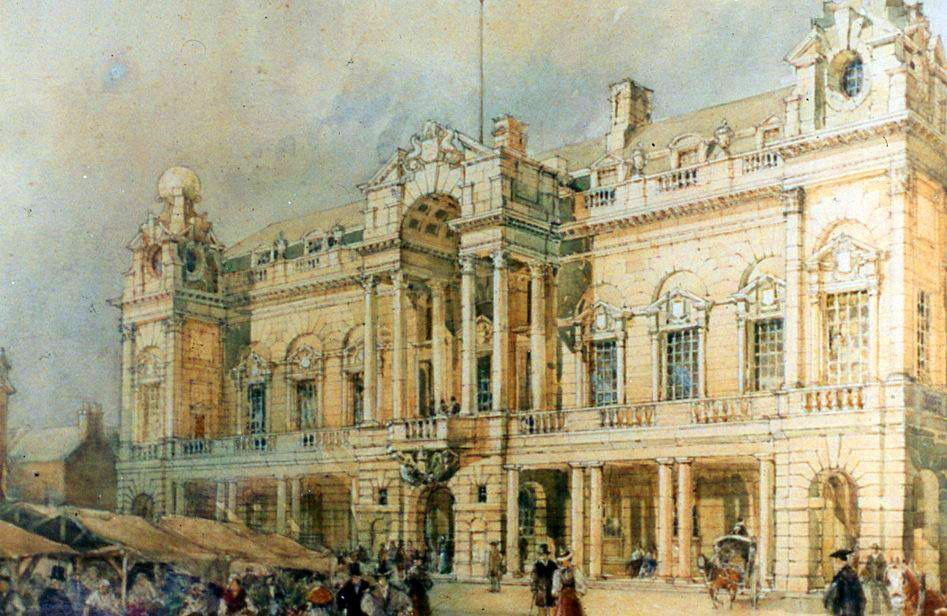 In the end, the council simply didn’t have the money to build Belcher’s masterpiece, which is why we ended up simply extending the Peas Hill building according to Charles Cowes-Voysey’s design, completed just before the outbreak of the Second World War – the below from the British Newspaper Archives/Cambridge Chronicle. which is this little treasure trove of information. 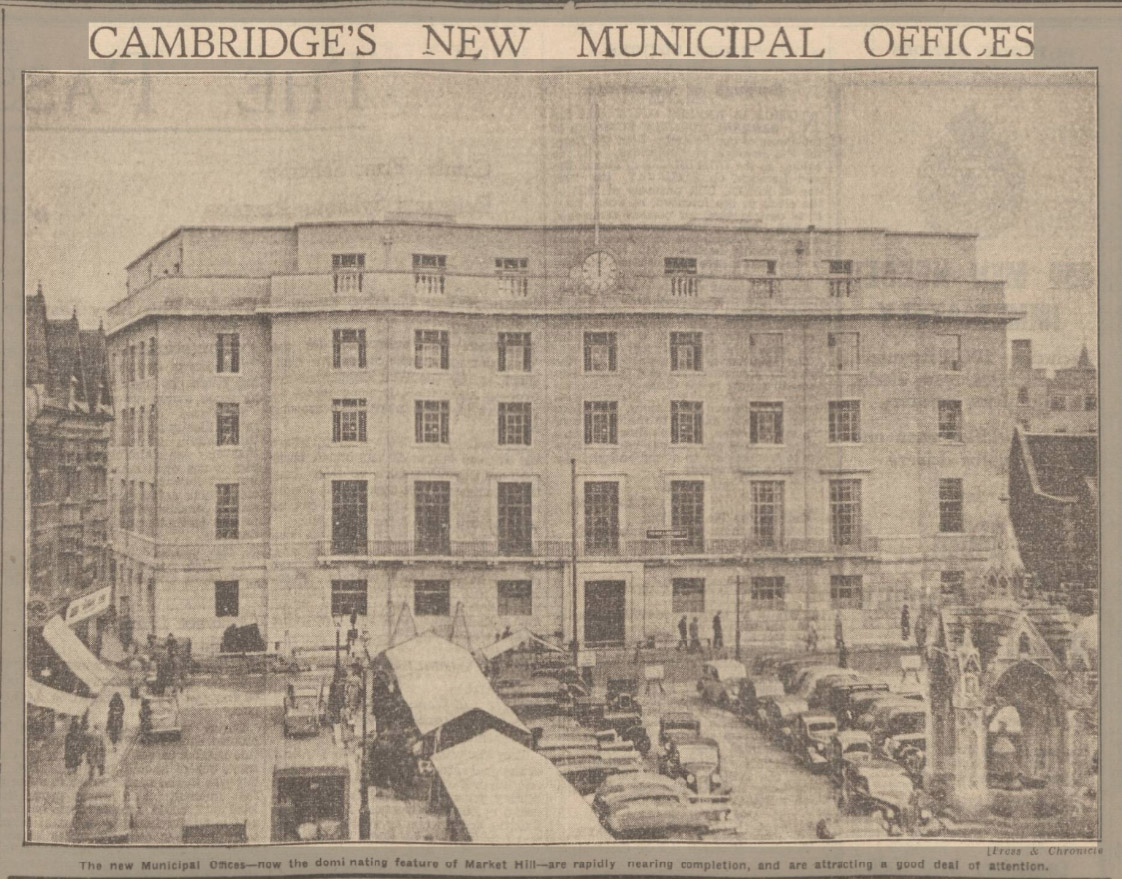 Compared to what Cambridge could have had, the best description of the current guildhall I can give is that it is ‘functional’. In the current political and economic climate, it’s hard to see what changes or improvements could be made to the current building.

Right of the ‘Cambridge City Council’ box is a dragon’s eye view of the Guildhall, with the large hall with the darker grey roof just behind it. The ‘square’ box between the Guildhall’s roof in light grey and the ‘large civic hall’ in dark grey is the council chamber – which is about two floors lower in height than the main Guildhall facade and the large hall.

The changes I’d like to see are for the council chamber to be raised up to the rooftop level, thus creating an additional civic hall and meeting space. This could have a glass dome similar to the Bundestag in Berlin. The roof of the Guildhall could then be turned into a Viennese-style cafe which, given the views would more than pay for itself.

Finally – and this is the least financially feasible bit, is to cover the existing facade of the Guildhall with white Cambridge stone as envisaged by Belcher’s design, perhaps incorporating his ideas for the front as well – thus creating a balcony that has far more space than the present one.

The only two ways I can see something like this happening are:

As I mentioned above, in the current political and economic climate, it’s difficult to see something like this happening. But…you never know.

Supporting my future research on the story of Cambridge the town

If you enjoyed this article and are interested in the history of Cambridge the town and the people who made our modern city, please support my research in bringing their records of achievement to wider audiences. Click here if you would like to make a donation or take out a small subscription to support my ongoing work.

One thought on “Cambridge’s unbuilt guildhalls”