Photographs from the Cambridge Daily News in the Cambridgeshire Collection show that war did not come as a surprise – in fact local readers were fully aware that fighting had broken out in other parts of the world a few years before, and was only a matter of time before it reached these shores.

During the mid-late 1930s, the Cambridge Daily News often lead with headlines coming from London or abroad.

Cambridge Daily News 03 March 1936 announcing a massive increase in defence spending – signalling rearmament. Neville Chamberlain was Chancellor at the time. His supporters credit him with this policy and ‘buying enough time’ for Britain to re-arm for the looming war.

League of Nations and Collective Security

Across the country – and particularly in left wing circles, the principles of collective security underpinned by the League of Nations was still very popular. Re-armament outside of the League’s framework was not, and thus the Government’s opponents accused it of rearming for another war between imperialist powers. 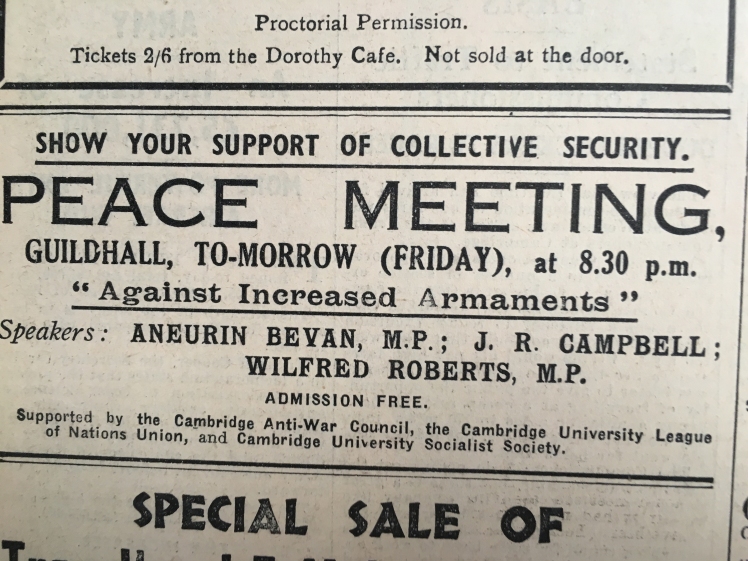 Above- from March 1936, a meeting against the rearmament policy of the Government.

While this was happening, the clock was ticking – and every so often, a headline that seems straight out of the history books suddenly feels very real.

It’s one thing reading about this event in a tatty history book in an under-funded state school in the mid-1990s, it’s quite another thing sitting in an archive with an original newspaper of the time reporting the event ‘as live’.

Don’t think discussions in Cambridge remained peaceful on such a serious issue either. The meeting at the Guildhall in March 1936 mentioned above, turned violent. 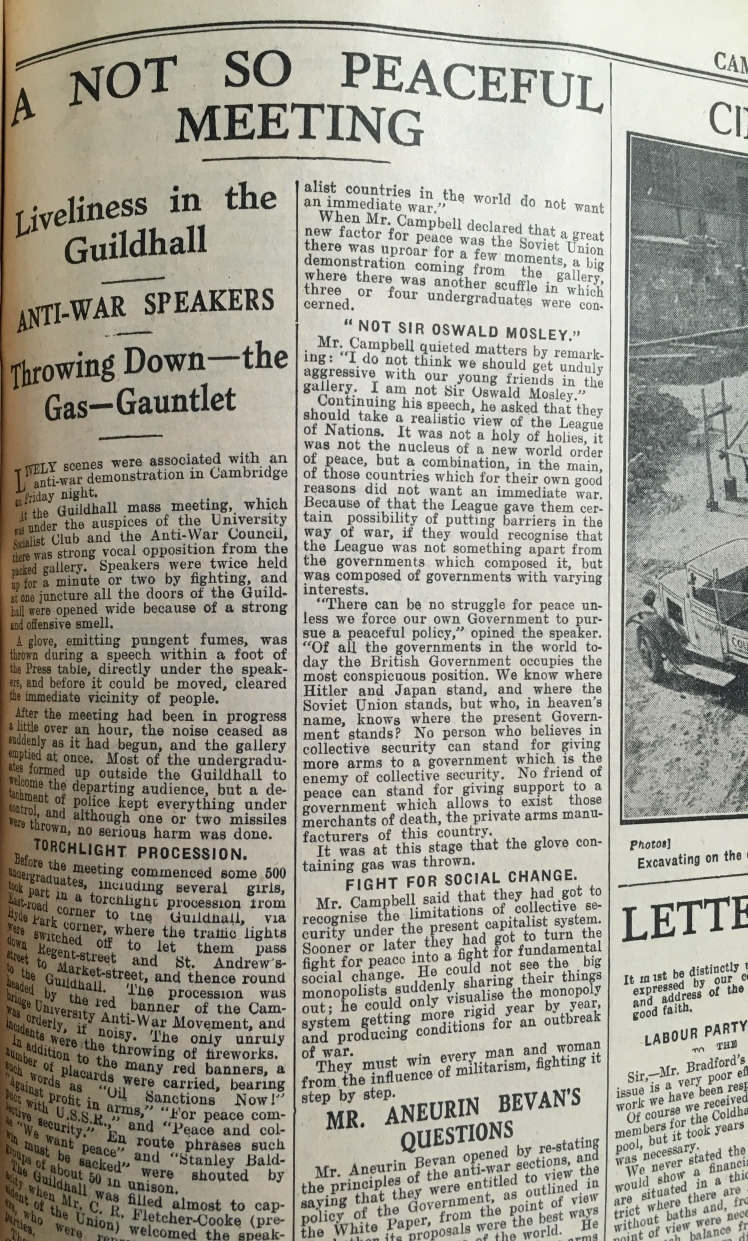 Cambridge also had a visit of a model of the ill-fated HMS Repulse as part of a recruitment drive. 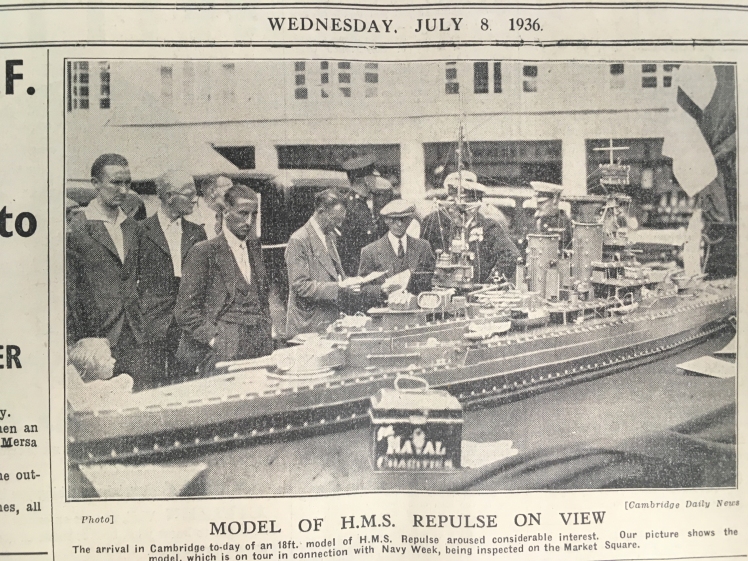 HMS Repulse was sent along with HMS Prince of Wales to re-enforce defences at Singapore in 1941 – along with the 18th Division of which the 1st & 2nd Battalions of the Cambridgeshire Regiment were also sent. Both battleships were sunk by Imperial Japanese aircraft, and Singapore was captured in what Churchill described as the the largest capitulation in British military history. Many did not survive the horrors of the Japanese prison camps.

Had they known what was looming, the Cambridge Daily News would not have run this competition.

“If you were dictator of Cambridge, what would you do?”

Yes – they really asked their readers. And if you thought it was just this generation that had crazy people who wrote into newspapers, you’d be wrong. Very wrong.

Ronald Searle quite rightly lampooned them in his Saturday sketch. It must have been a slow summer in the local newsrooms.

In the meantime, civil war had broken out in Spain between the Republican Government (following the overthrow of the Spanish Monarchy) and Franco’s fascists.

Much is made of the support the British Trade Union movement gave to the anti-fascist fighters, and understandably so. Less is mentioned of the role the British Government played in enabling Franco’s forces in the first place. A few years ago, Peter Day wrote a book about this – see here. One of the things that really strikes me about the headlines in the Cambridge Daily News is that in any other decade, incidents that occurred involving British citizens, assets or property, would have resulted in Britain responding militarily – possibly even intervening full scale.

…such as the eight sailors on HMS Hunter killed by a fascist mine – or rather a mine laid by Franco’s forces. 1937 saw refugees from Spain arriving in Cambridge as well.

Major Freyer was an officer in the Cambridgeshire Regiment during the First World War, and Dr J Needham is the prominent scientist and Sinologist Joseph Needham. 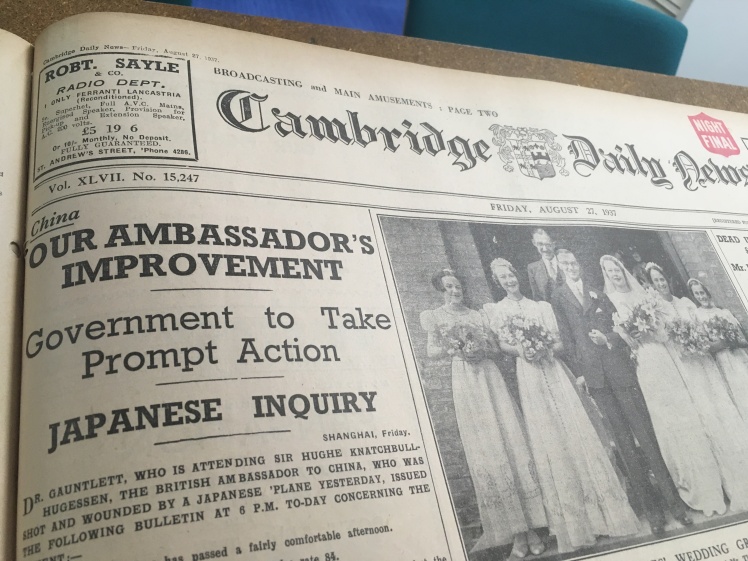 The incident above could easily have led to war between Britain and Japan in 1937, even though neither Britain nor any of the Western democracies or colonial powers were in any position to do much about it other than putting their existing colonies at risk.

That didn’t stop students from protesting against the atrocities being carried out in that war. 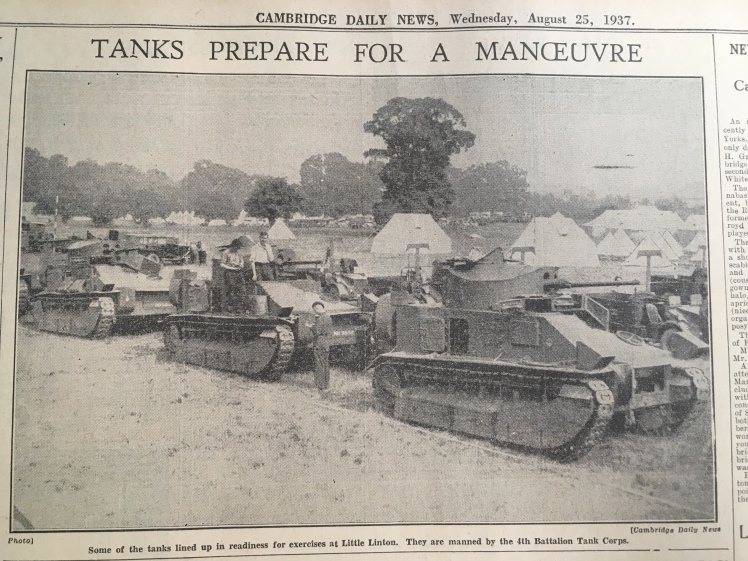 When we consider the many publications about WW2 since, it’s easy to forget just how ill-prepared for mechanised warfare the British Army was. But one of the really sobering things of note was how retail and private firms prepared for war. 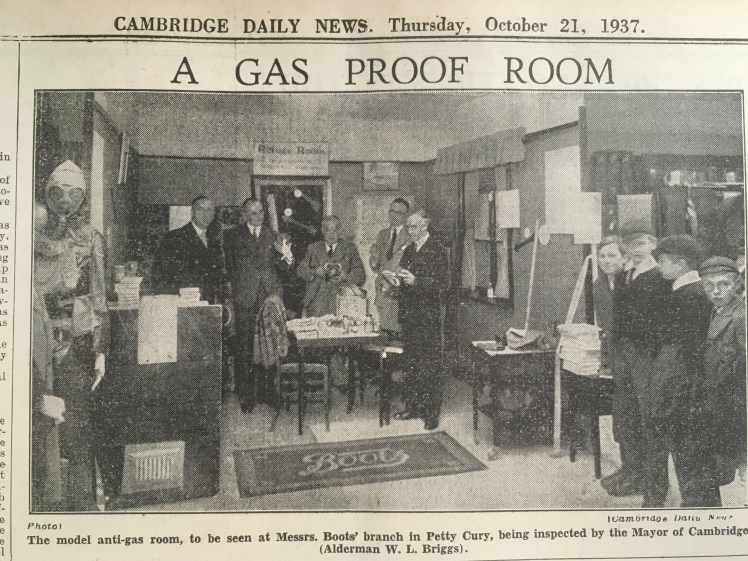 Even Ronald Searle could not avoid it.

…using horseracing as a distraction.

Within left-wing circles, Cambridge contributed a lorry’s worth of food bound for Barcelona. Both Leah Manning and Frida Stewart were active in Spain for the anti-fascists during this time. 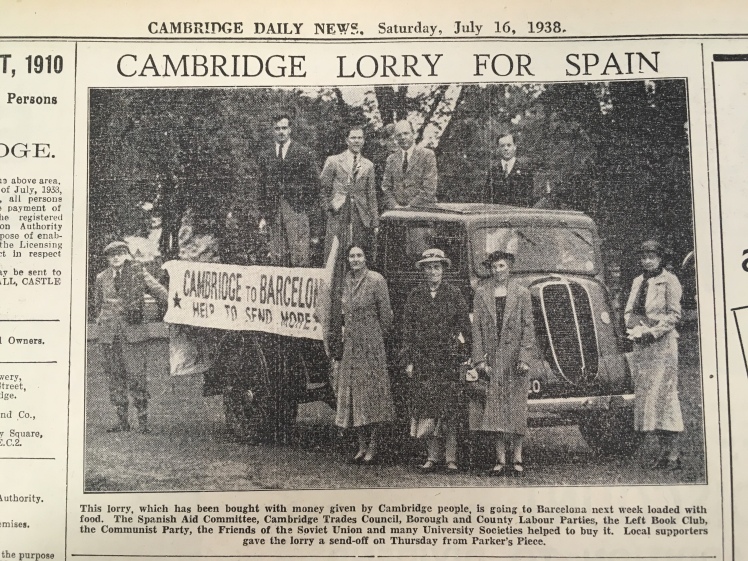 Frida’s mother, Mrs Jessie Stewart is the woman on the far right of the photograph on the left side of the truck cabin.

…while on Mill Road, an army recruiting office was opened.

But even as late as summer 1938 Cambridge’s League of Nations Union was still going strong.

…while Cambridge was being kept up to date on developments in China.

But as autumn 1938 approached, preparations for war and civil defence stepped up. TO follow in part 2.