The founder of the global charity Save The Children, Eglantyne Jebb, is celebrated every year on 17 December by the Church of England. What is much less known is what she did before founding the charity. She is on public record saying that the ideals and ideas that she had in public life she owed to her time in Cambridge (the town – not the University!). So what did she do here and what did she learn?

From Save The Children, this is a photo of Eglantyne around the time she moved to Cambridge to live with her mother – also called Eglantyne but known as Tye. Tye’s husband (and distant cousin with the same surname), and Eglantyne’s father was a Conservative landowner and barrister Arthur Jebb. When he died in 1894, Tye moved to Cambridge to be with her brother, the Cambridge Classicist Sir Richard Claverhouse Jebb. In the late 1800s, Eglantyne trained as a teacher at Stockwell, before embarking on a career teaching in Marlborough. What this and other photographs at the time do not show is the colour of her hair – accounts from the time describing her as having ginger/flame-coloured hair. 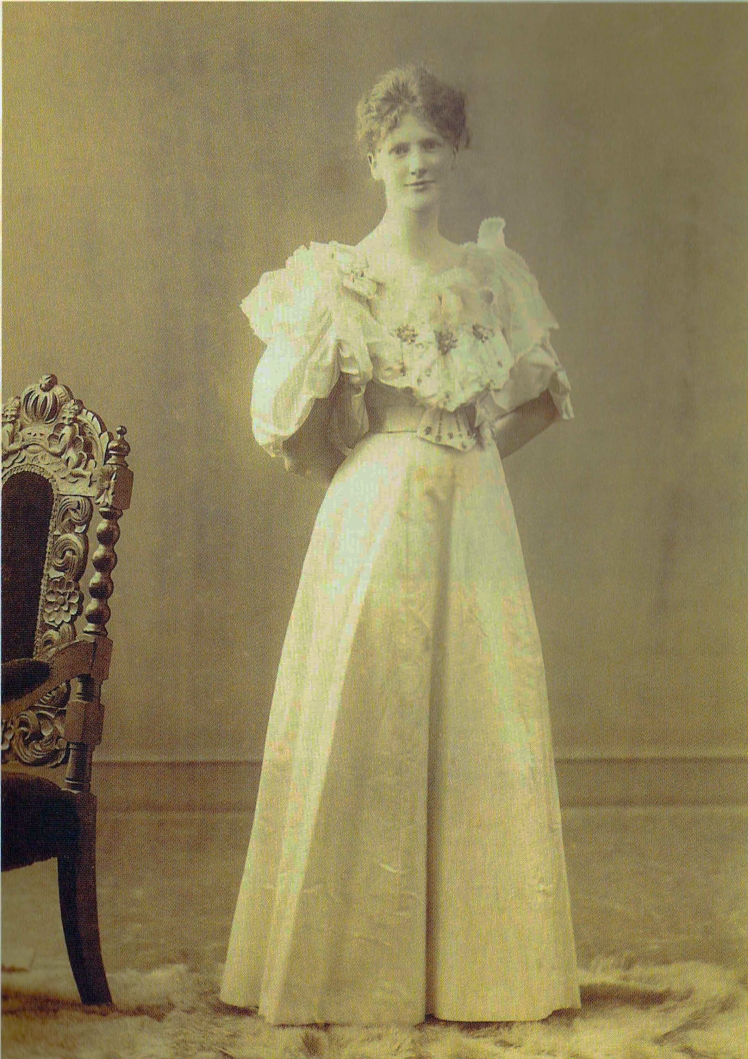 Her days at Oxford (Eglantyne pictured in a ball gown above – one of my favourite photographs of her) and as a trainee teacher are brilliantly written in Clare Mulley‘s recent biography of Eglantyne, titled The Woman Who Saved Children. It was Tye who insisted that Eglantyne come to live with her in Cambridge.

Eglantyne’s ‘worldly years’ (as her sister, the campaigner Dorothy Buxton called them) were inside the bubble of Cambridge’s upper class society, going to balls, dinner parties and picnics. It was only after she had her heart broken that the pillars of Cambridge civic activism, economist Mary Paley Marshall and future Mayor of Cambridge, Florence Ada Keynes (mother of John Maynard Keynes, and of modern Cambridge too) got her working for the Cambridge Charitable Organisation Society.

This photo from Linda Mahood’s book Feminism & Voluntary Action from around the time Eglantyne was working for the Cambridge Charitable Organisation Society in the mid-1900s.

An audit of Cambridge’s charities 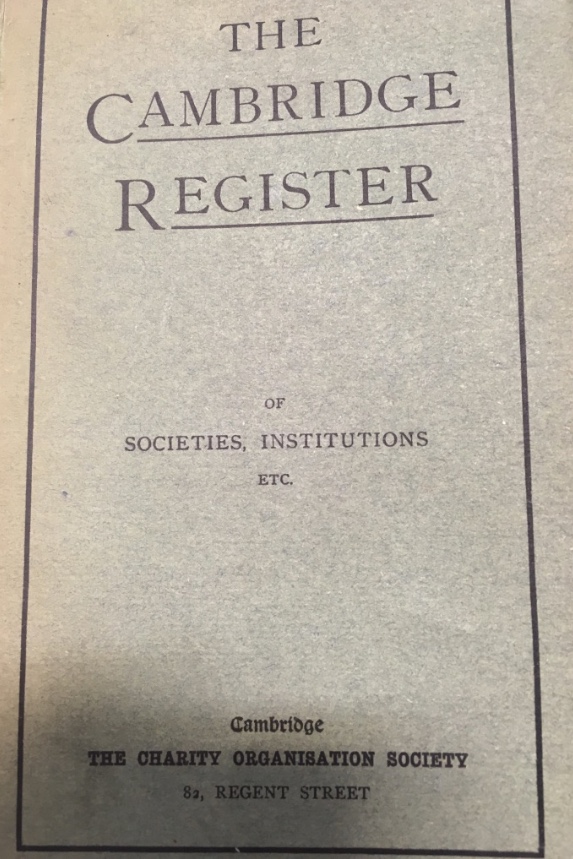 Eglantyne’s first publication was uncredited and published in the corporate name of the Cambridge Charitable Organisation Society. Local activists campaigned to get it put up – just a shame it is placed somewhere where it can’t be read from the street! 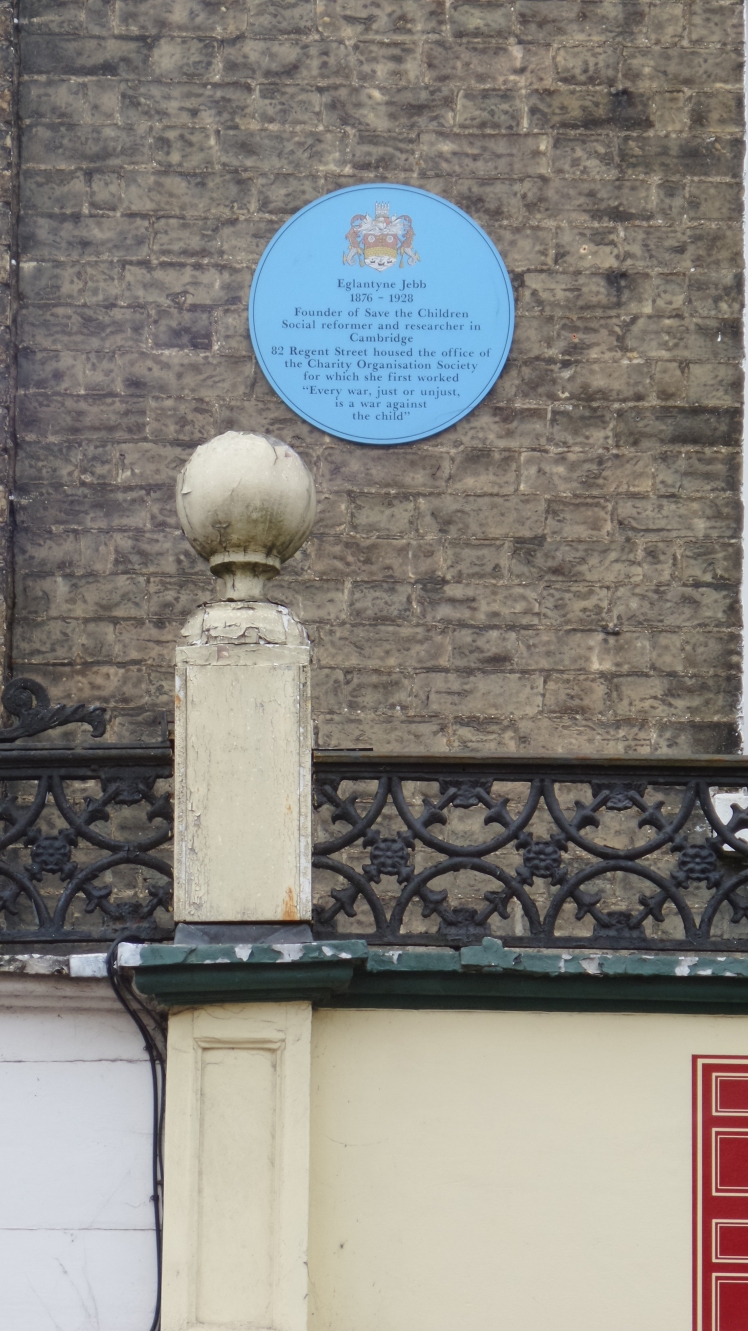 82 Regent Street, Cambridge, with the blue plaque tucked away where no one (other than passengers on the top deck of buses) can read it – when stuck in traffic!

Cambridge – a social scientific study of poverty and multiple deprivation

One of Eglantyne Jebb’s greatest gifts to Cambridge in my view is her book: Cambridge – a brief study in social questions. It wasn’t a brief study – it was the first social scientific analysis of the causes of poverty and multiple deprivation in our town, of which there was lots. Along with Margaret Keynes, the daughter of Florence Ada Keynes, she surveyed the town. It was this study that shaped her political opinions as she moved away from the light conservatism of her family towards the progressive liberalism of Florence Ada Keynes and family. (Both Florence and Maynard were invited to stand for Parliament in Cambridge at the same time – the former for the town seat and the latter for the university seat in the days when Cambridge University had a seat in Parliament. Both declined!) 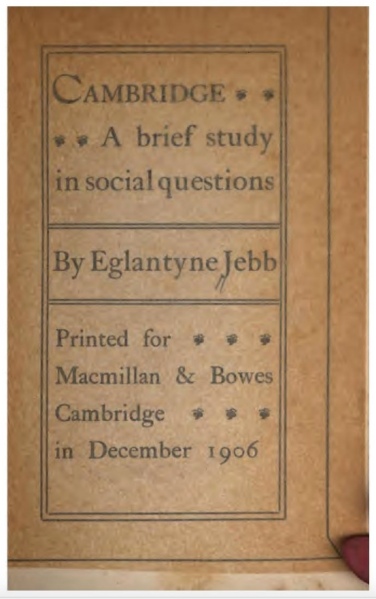 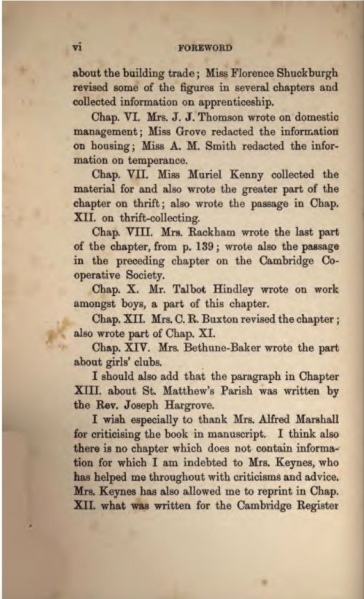 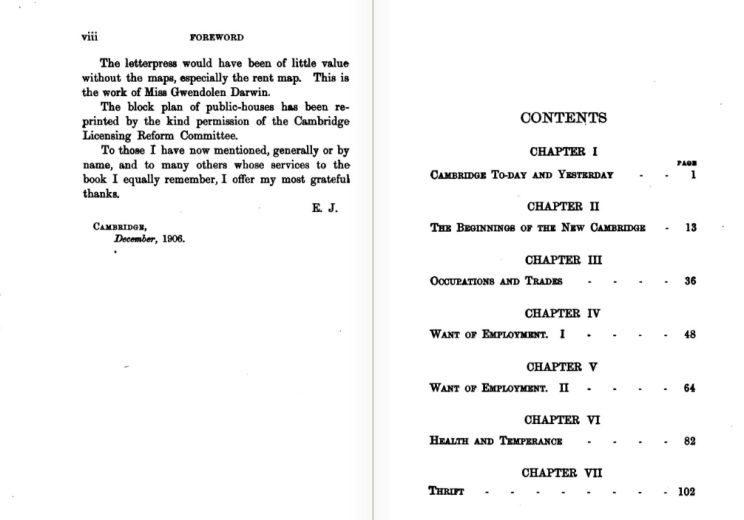 Screenshots from Eglantyne’s book published in 1906 – Eglantyne gives us a list of people who helped her with the book, which included members of the families of some very eminent Cambridge University academics – nearly all of whom lived lives and achieved greatness in their own right. All of the women mentioned would be part of a group/generation of Women of Cambridge who would transform it from a patriarchal prison of a town (where unchaperoned women would risk being thrown into prison by Cambridge University authorities – and no they haven’t apologised for it yet) to the modern city that we know today.

Chasing up the state institutions

Eglantyne didn’t just sit back and do nothing – she was elected to the town council’s board of education – but unfortunately was unable to play a full part, regularly missing meetings. This I can only put down to health problems that started to afflict her, and her mother’s insistence that Eglantyne join her for visits to spa towns abroad. But I need to go through a number of other archives to confirm this.

Eglantyne published an update to her book two years after the original publication. 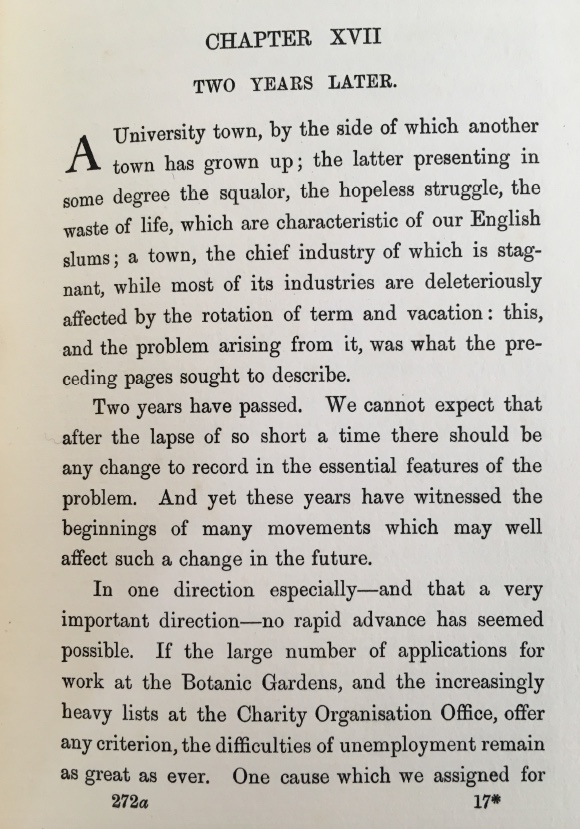 From the Cambridgeshire Collection – the 1908 edition of Eglantyne’s study

Eglantyne tells us that in the two years since her book was published, unemployment remained a persistent issue in Cambridge. Where they had made a difference was in public health – in particular it was the new local public health visitors that started making a big impact on improving the health of children.

One of the things the world of the internet and digital technology has given us is the ability to access huge databases and do keyword searches through them in a matter of seconds. This is already coming into its own with the civic goldmine that is the British Newspaper Archive Online. It was through this archive that I discovered just how extensive Eglantyne’s party political activities in Cambridge were – in particular between 1908-1913. 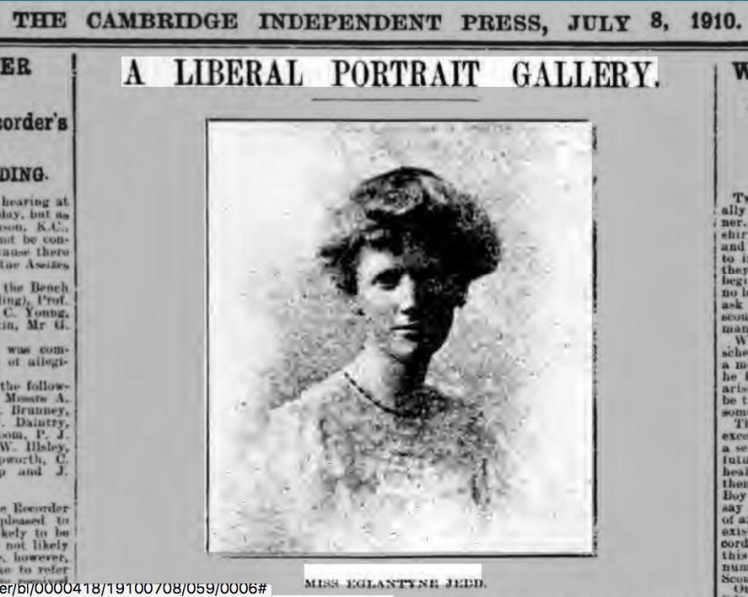 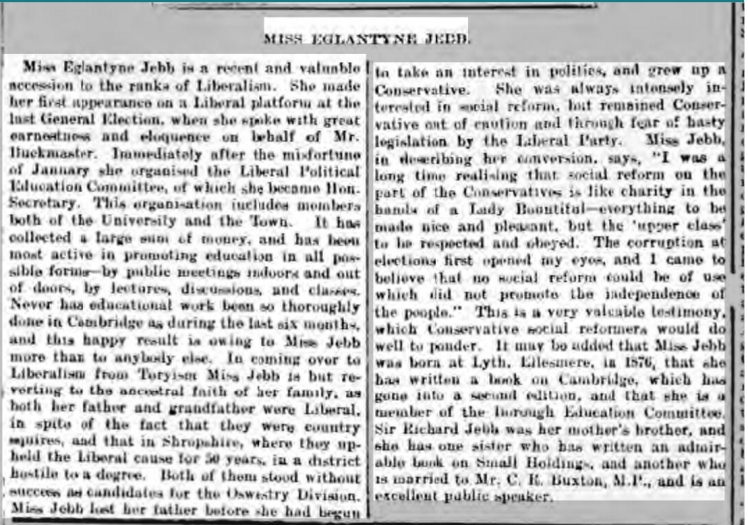 From the British Newspaper Archive, a glowing account of Eglantyne’s activities in Cambridge, from July 1910 in the liberal-supporting Cambridge Independent.

Even though the liberal candidate (and sitting MP), the barrister Stanley Buckmaster KC lost the general election of January 1910, the Liberal Party (who were in government) called a snap election in December 1910 over the issue of the House of Lords blocking legislation bringing in important reforms – the foundations of the welfare state such as state pensions and national insurance.  Eglantyne, who was on holiday in Austria with her mother at the time (against her will it must be said), rushed back to campaign for the Liberals. Suffering from illness in her old age, Eglantyne’s mother, Tye, would insist her daughter accompany her on travels to the spa towns of Central Europe. 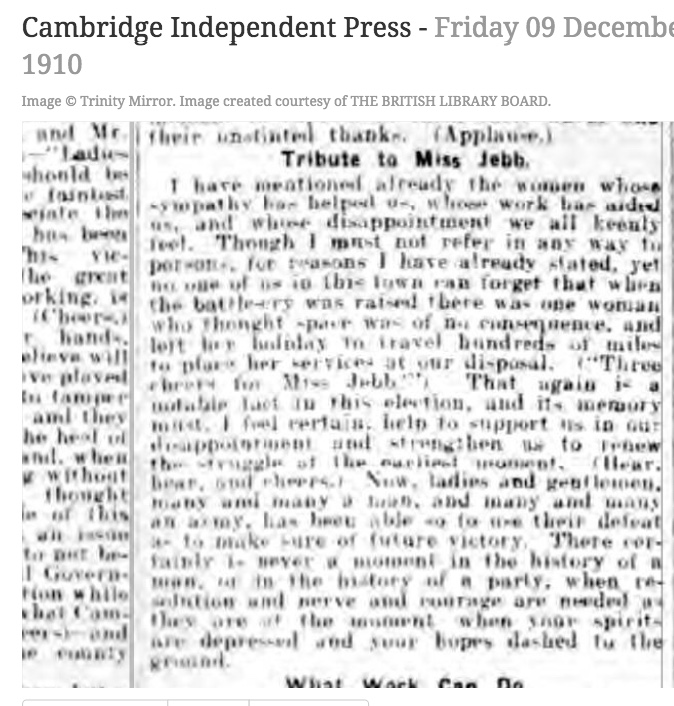 “I have mentioned already the women whose sympathy has helped us, whose work has aided us, and whose disappointment we all keenly feel. Though I must not refer in any way to persons, for reasons I have already stated, yet no one of us in this town can forget that when the battle-cry was raised there was one woman who thought no consequence, and left her holiday to travel hundreds of miles to place her services at our disposal. “Three cheers for Miss Jebb!””

I have speculated as to whether Eglantyne Jebb was the best MP Cambridge never had, given the bar on women voting and standing for Parliament at the time. 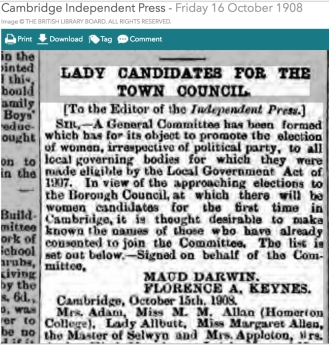 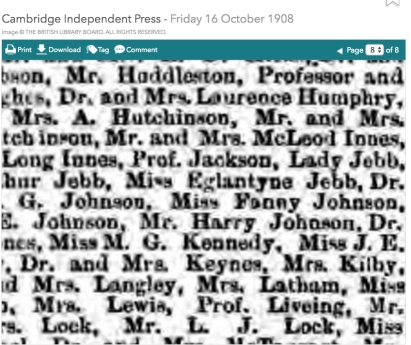 We know that Eglantyne was interested in women participating in democracy from this letter signed by the great and the good across Cambridge calling for women candidates to put their names forward for the first town council elections following a change in the law in 1907 that removed the ban on women standing. Note that on the very public list of names you see married couples signing the public letter. This includes the husband of Florence Ada Keynes, the Registrar of Cambridge University, Dr John Neville Keynes.

What we also know from her public speeches in Cambridge just before the First World War are her views on a number of political issues that impact on the lives of the poorest of the poor. She shares a platform with John Maynard Keynes making the case for removing trade tariffs on food so that food prices don’t rise for the poor. (Remember this was in the days before the 1945 welfare state, and at a time when as her research showed, Cambridge’s infant mortality rate was one in eight). She also made the case for a national minimum wage. 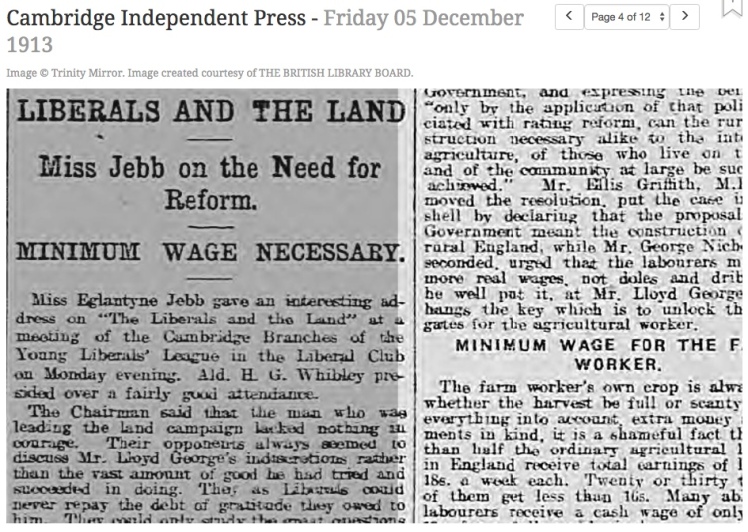 Eglantyne Jebb on the minimum wage and land reform. Cambridge Independent in the British Newspaper Archive.

Eglantyne was getting involved in civic international politics before most people realised it was even a concept. In late 1913, while much of Europe was arming and preparing for a military conflict that would become the First World War, Eglantyne made her way to The Hague for the 20th Peace Conference. 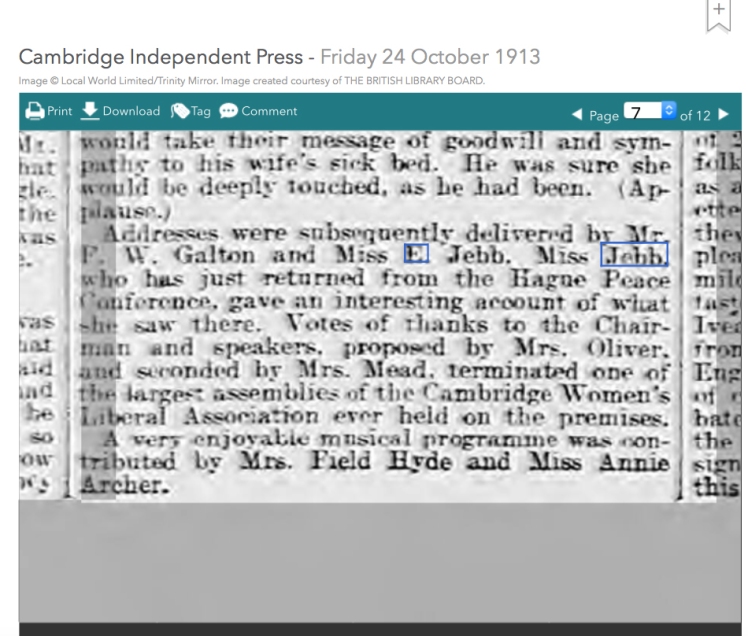 The Cambridge Independent accounting for Eglantyne Jebb’s attendance at the 20th Hage Peace Conference in The Netherlands. From the British Newspaper Archive.

Prior to that, and following another broken heart – this one stemming from the engagement of her close friend and partner Margaret Keynes to the future Nobel Prize winner A.V. Hill, Eglantyne undertook voluntary work in Macedonia. 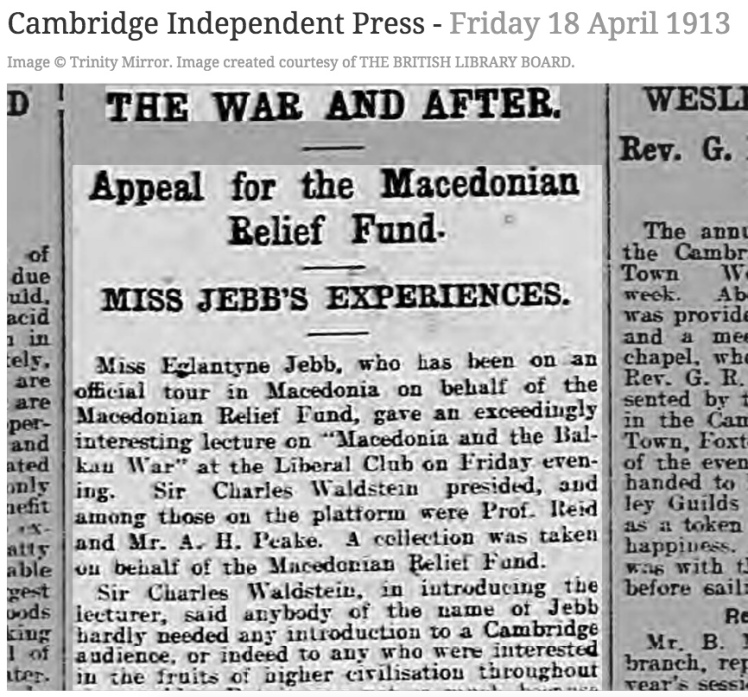 A headline in the Cambridge Independent in the British Newspaper Archive on Eglantyne’s return to Cambridge.

Given Eglantyne’s varying health – she’d later be diagnosed with a thyroid problem, and suffered from bouts of depression as well, I am amazed at the courage Eglantyne showed in going to Macedonia, which at the time was a war zone as the Ottoman Empire collapsed back to the gates of Constantinople followed by another war as the alliance of small states against the Ottoman Empire fought over the spoils of victory.

The First World War breaks out

Eglantyne left Cambridge and retreated to rural Scotland. Yet in December 1914 she had a very little-known but incredibly significant article published in the Welsh Outlook magazine, (held by and digitised by the Welsh National Library) about what war would lead to. I have transcribed the original article here.

What is most significant for me about Eglantyne’s article in Welsh Outlook is a further political conversion – away from turn-of-the-century Liberalism towards that of the Co-operative movement. She predicts that the economic future of humankind would be based on the principles of the co-operative movement.

Eglantyne and her sister Dorothy would also go onto volunteer for the pacifist Cambridge Magazine, which managed to get permission from the Government to translate news and opinion pieces from foreign publishers – including those in enemy nations in the war. It was a dangerous thing for the magazine to do in the face of an angry public – at the announcement of the armistice, a group of Cambridge University students decided it was the time to smash up the magazine’s premises in town. 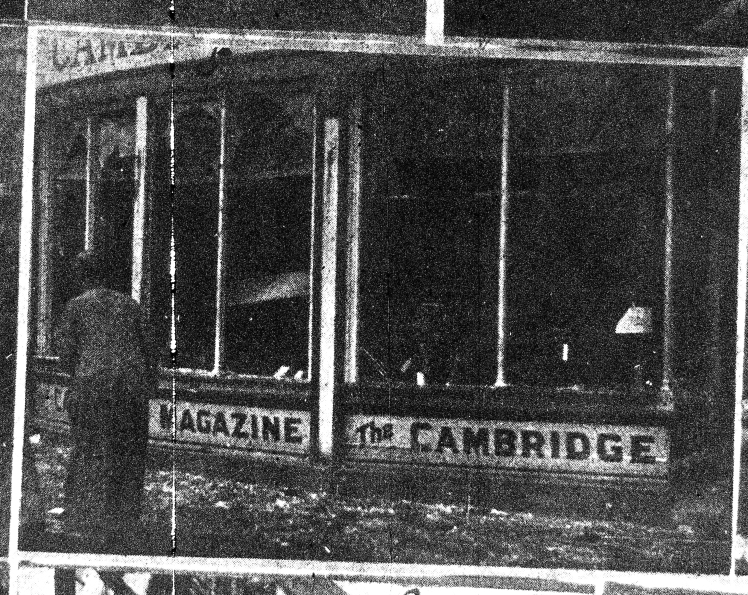 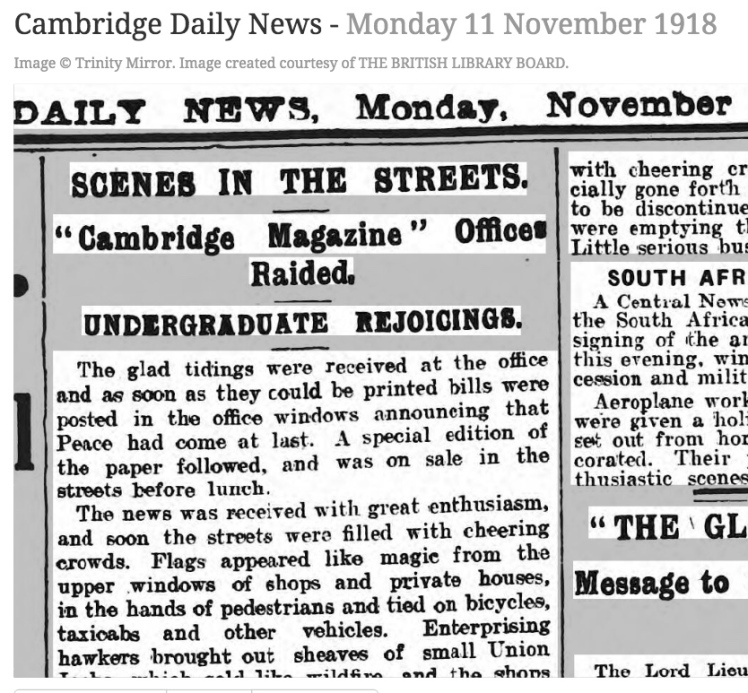 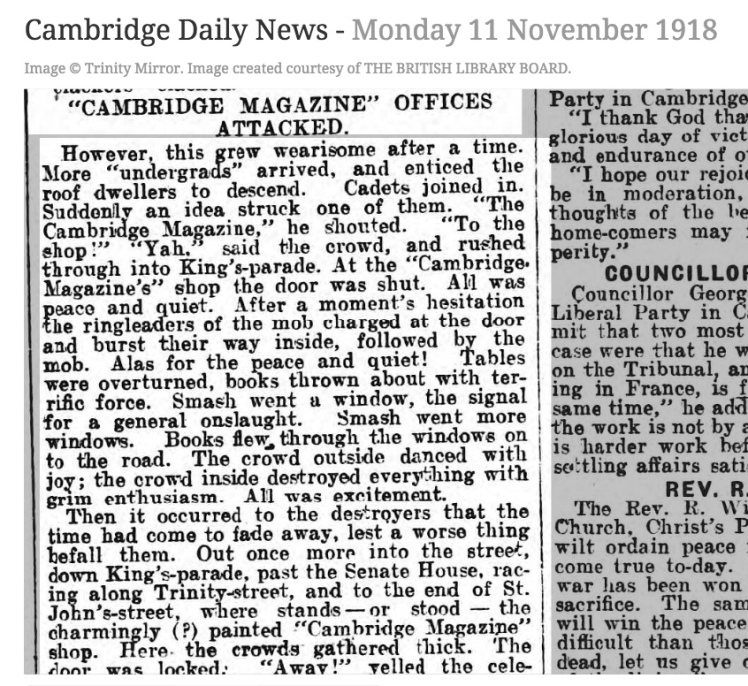 The Cambridge Daily News from the British Newspaper Archive carrying the headline, and description of what happened.

In a fundraiser for Save The Children, Eglantyne returned to Cambridge at the invitation of the Cambridge branch of the National Council of Women, one of the biggest civic organisations in the country at the time. This from the Cambridge Independent on 22 February 1922. 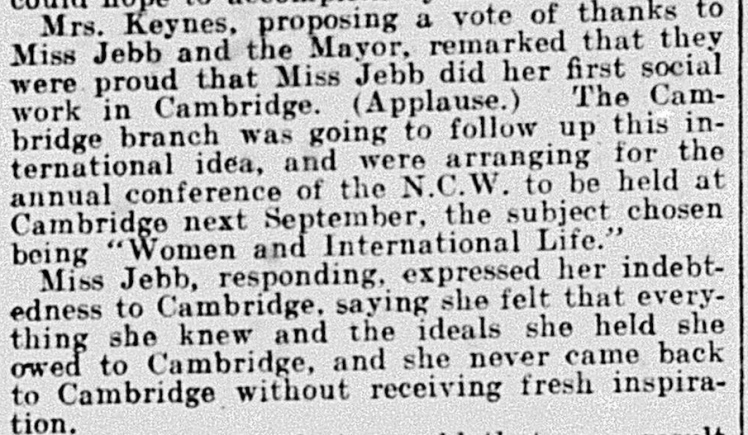 I’d like to think that, just as Eglantyne said that her time living and working in Cambridge was the making of her, such was the impact of her work here that she had just as much of an impact on Cambridge – especially when we look at the delivery of many of her policy recommendations in her study of poverty in our town. I think her legacy is something Cambridge should celebrate.