It’s all in the keyword searches

The British Newspaper Archive online has been a real game-changer in making local history much more accessible to the general public. It has also made searching for specific articles, events or individuals much faster than doing so manually. In the case of Frida Stewart, digital access has been essential – in particular her activities and tours across the country.

Imagine going through 75 years worth of newspapers one by one…

…and compare that with doing a simple keyword search. Although the technology isn’t perfect, it picks up more than enough to be useful for both professional historians and curious browsers. The time period I’m interested in represents something of a golden age when public meetings were comprehensively written up and printed in local newspapers. Hence we have details of who went to which meetings and said what.

It’ll take ages for the archive to digitise it all

Therefore I’m interested in how the archive can raise more funds/get more grants to employ more people to speed up further the scanning process. Their scanning team has a blog here, and they’ve so far scanned over 22million pages – with a target thus far of 750million pages. So only about 3% has been scanned.

I’m interested in knowing if it’s possible for individual people or institutions to pay or make grants to the archive’s operation in order to provide additional capacity to that scanning operation, and using those extra staff to prioritise the research needs of the funding organisation. Thus not disrupting the existing work of the archive and having such a funding stream leading to a slow down in work in other areas.

From a local public policy perspective, “have we been here before?” is a question I often ask with the various problems we face and ideas we come up with. “What’s changed since then?” is another one – technological advances often being a frequent answer. Cambridge like elsewhere was incredibly disrupted/transformed by technological advances:

Personally I find it fascinating to read how my predecessors in this town of ours responded to the changes in technology. I guess future generations will be asking the same: The switch from landlines to mobiles in the late 1990s and the growth of the smartphone and social media a decade later. I’m sure someone will have an answer as to why short film clips of families of kittens jumping around in a moggie nursery are more compelling than the latest political campaigning video from a political party.

Why the decline of local newspapers worries me

On one side, where is the historical record being recorded? In Cambridgeshire we have the county archive – also online here but their catalogue is very temperamental. Have a look at the table of records for Cambridge Borough Council and successors. Also, Cambridge’s civil defence records make for very interesting reading.

The thing is with the above records, inevitably they are not designed to be read by the curious browser. Thus finding out what happened and when in times gone by is far more accessible through newspapers – give or take the preferences of the local proprietor. In this social media age of ours, in order to stay financially afloat there is a strong incentive for ‘clickbait’ style coverage rather than ‘public interest’ coverage. But the latter is the bread and butter of a new/young journalist’s foundation. Most of the paid local journalists that I meet at local council meetings are younger than me. The Local Government Correspondent for the Cambridge News is a prized role – the success rate of predecessors moving straight onto national media organisations in recent times is striking. Well…all two of them – Chris Havergal and Jon Vale. The current postholder is Josh Thomas, and no you can’t have him. Tara Cox has also set the standard on local court reporting. We’re also lucky to have a reborn weekly – the Cambridge Independent which complements rather than competes with the Cambridge News – meaning that local government reporter Ben Comber can cover articles in more depth due to longer lead in times.

The one thing I try to tell myself when covering local meetings is to think as an historian – what are the things that the researchers of the future are going to need to know? In one part that sort of explains why I film so many meetings. Future technology will enable researchers do the equivalent of key word searches in the audio that’s recorded so they won’t have to sit through hours of otherwise dull meetings. Let’s face it, I don’t enjoy filming three hour meetings, I doubt those attending and participating enjoy such long meetings, and I doubt their predecessors in politics did either. But if you’re going to do complicated public policy, you can’t do it by slogans and deals over a slap up lunch…even though in my opinion Brexit ministers are giving it a good go going by today’s headlines in the papers.

But back to digitisation…

Amongst other things it allows for the small project researchers far greater access to a wealth of resources and the tools by which to interrogate all of that data. With some of the things I’ve discovered you could write small publications on the basis of newspaper archive content alone.

Therein also lies the risk. It’s not just newspapers that need to be digitised, but other archives too. Hence the Internet Archive being wonderful for digitising long forgotten texts. For example Cambridge by lamplight woodcut prints published by Heffers in 1921. It’s just as important to corroborate from other sources rather than to take just from newspapers.

This is also one of my arguments – generating interest in local history leading to greater trade and economic activity in that area. In particular for small scale local publishers – in Cambridge’s case the Oleander Press. I’d like to think that local museums would also get a boost too. Certainly with the Museum of Cambridge there’s been a growing interest in the otherwise forgotten histories beyond the ivory towers of the colleges. Furthermore, the history of migration and the history of women’s political activities in Cambridge have far more to them than perhaps many first thought. In particular Cambridge being not just a place of refuge for those fleeing persecution, but as a town that campaigned and lobbied national governments over such persecutions. 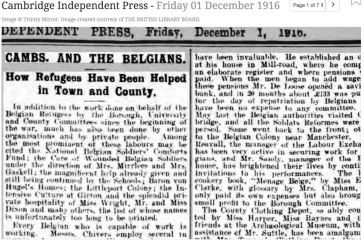 Four examples above: Top left – a county archive entry on a meeting about persecution of Jews in Eastern Europe in 1882; bottom left – the ‘Cambridge Moslem Association’ dating back to 1910; Centre –  Belgian refugees in Cambridge during the First World War – at pains to state that all able-bodied men amongst them were in work. Cambridge would also take in refugees fleeing fascism in the 1930s, and right, Cambridge students protesting against atrocities in China committed by Imperial Japanese forces in 1938.

Finally, we may also find that whatever the history is at a national level on national and international events, the local reactions to the same things may be much more varied than we realised.