As far as politically-active women go, in the 1930s both Eva Hartree and Leah Manning were two of the most prominent nationwide. In 1930 former Homerton College student (and thus local resident to me) Leah Manning (later Dame Leah Manning) was the first woman president of the National Union of Teachers, and briefly the MP for Islington East following a by-election in 1931. (She was unable to hold the seat at the general election later that year). Eva Hartree (who was at that early powerhouse of civic women in Cambridge, Newnham College) was one of the early women councillors elected to what is now Cambridge City Council. She became our first woman mayor in 1924.

Responding to events in Germany where the Nazis took power in 1933, Hilda Sturge of the Friends Meeting House in Cambridge formed the Cambridge Refugee Committee with Margareta Burkhill, Eva Hartree and Sybil Hutton. It was from this point that they started making arrangements for the town to receive refugees.

…as the Cambridge Independent from just over 6 weeks after the outbreak of the First World War shows with this headline.

One of the people involved in the co-ordination of the response to the needs of the refugees – many of them university academics, was Cllr Florence Ada Keynes. A close friend of Eva Hartree (I’ve seen some wonderful written correspondence between the two in the Cambridgeshire County Archives), both Eva Hartree and Florence Ada Keynes were on Cambridge Borough Council in the 1930s (Florence’s own mayoralty, the second woman to hold that office was 1932/33). Today we know that organisation as Cambridge City Council.

I was actually doing more research on Leah Manning and Eva Hartree in relation to Florence Ada Keynes & women’s rights when I fell down an internet whirlpool and found a number of digitised primary sources on their work in the 1930s. As a result, I’m not going to go into detail in this blogpost because the full story of the Cambridge Refugee Committee has not been fully told – it hasn’t been given the publicity it deserves. Some work has been done – for example a mini exhibition at the Cambridge Central Library recently. (See photos here – the organisation behind them is Keystage Arts and Heritage). But the real in-depth story doesn’t feel like it is embedded into our civic history as much as it could be. For those of you interested, The archive papers and minutes of the Cambridge Refugee Committee are at the Cambridge University Library here.

One of the people mentioned in the weblink above is Margareta Burkhill, whose papers are also mentioned. I knew nothing of her until a couple of hours ago before writing this. This is her. Furthermore, courtesy of the Imperial War Museums, we can now hear her experiences in her own voice. This digitised from an interview in 1980.

The case of Doctor Franz Hildebrant is described in this book. Hildebrant was a Christian preacher and a friend of Dietrich Bonhoeffer. What makes Hildebrant’s experiences interesting from a local perspective is his impact on Cambridge during wartime. (Summarised on his Wiki-Page).

There is also the heartbreaking story of the Six from Leipzig told by Gertrude Dubrovsky in the book of the same title. This also tells her experience with the Cambridge Refugee Children’s Committee – a sub-committee of the main one.

I stumbled across this desperate telegram from Leah Manning, then a former Labour MP for Islington East, to Labour Party Leader Clement Attlee.

From University of Warwick’s digital collection here, a snapshot of an urgent telegram from Leah Manning to Clement Attlee dated 02 May 1937. This was part of her efforts to evacuate as many children and civilians from the port and city that was being bombed by Franco and his fascist allies.

As an aside, one thing to remember with Bilbao is its strong historical trading links with the UK over the centuries. Furthermore, there is a strong footballing connection with Athletic Bilbao & England in particular, hence using the English spelling of ‘Athletic’ rather than ‘Athletico’ as with their rival football clubs. Not the only big European club with historical links to England, Juventus and Notts County played this game in 2012.

There are further items and telegrams from Leah Manning in The University of Warwick’s collection. Leah’s own experiences are told in more detail in her excellent autobiography. Such were Leah’s contributions that, as Sarah Lonsdale writes, over £2million of contributions were made to victims of the Spanish Civil War.

One of the things that is striking about the outbreak of the Second World War is just how polarised UK society seems to be – especially when viewed in the context of what we know now. For a start, in the run up to the outbreak, there was huge opposition to rearmament – in particular in left wing circles. Many speakers such as Labour Councillor Dr Alex Wood spoke out time and again about the evils of war.

From the Cambridgeshire Collection’s microfiche newspaper archive, Dr Wood stood twice unsuccessfully for Parliament in Cambridge for Labour in the 1930s. The snapshot on the right is him on Parker’s Piece in May 1934.

But not everyone agreed with him. Leah Manning amongst others took the view that pacifism wasn’t going to stop the rise of fascism in Europe; at some stage it would need confronting. 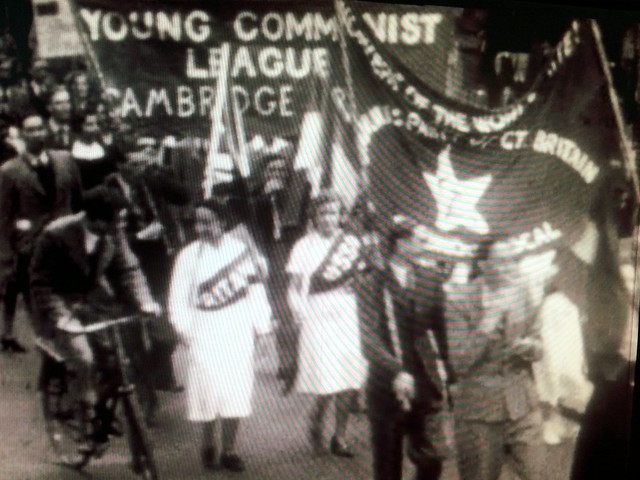 A screenshot from the BFI unit in the Cambridge Central Library shows the May Day protest in May 1939 where protestors both campaigned against an imperialist war against Germany, and for a broad anti-fascist alliance. Visit the unit here.

By the end of 1939, Cambridge had the highest proportion of refugees in any town or city in England outside of London.

That doesn’t mean Cambridge got it right all the time. In fact there are two examples where it got things wrong. Badly.

The case of Walter Hertz

I dread to think what happened to him. A Jewish lawyer convicted of being in the country without permission and recommended for deportation four weeks after the UK had declared war against Germany.

The case of Dr Melitta Gerhard

As far as Newnham College is concerned, this is one of their biggest errors of judgement in their history – but fortunately it did not have fatal consequences.

From the book “Second Chance – Two Centuries of German-speaking Jews in the UK”, I discovered that the first woman professor at a German university, Dr Melitta Gerhard was barred from teaching by the nazis in 1933 (Weblink to article is in German). Although she was able to emigrate to the USA, she was turned down by Newnham College before leaving for the USA.

This is why digitising archives is ever so important

These three documents from the Hirschland Bank and Family Collection online here make for fascinating reading.

These papers related to Mr & Mrs Emil Neumann in relation to their attempts to emigrate from the UK to the USA. There are a number of very interesting pieces of information as far as Cambridge local history is concerned.

Joseph Bright Skemp – Assistant Secretary & Accounting Officer for The Cambridge Refugee Committee. He would go onto become a well-known classicist at Durham, before coming back to Cambridge to retire on Hills Road – the same road that Leah Manning’s Homerton College is on.

It’s not clear who from Barr and Co (whose offices behind the old Red Cow pub at the back of the Guildhall, is now a language school) signed the letter of reference also for the US Consulate General, but what we know from both letters is that they stayed for an extended period of time at the old Lion Hotel, Cambridge – now buried under the monstrosity that is called the Lion Yard Shopping Centre.

This plus the old metal sign below – both at the Museum of Cambridge, are all that remain of where Mr & Mrs Emil Neumann stayed in Cambridge during the Second World War.

One other thing to note is their enquiry to the Board of Trade – now the Department for Business, Enterprise & Innovation. This and other documents in the digitised archive reveal that they asked Whitehall whether any register or valuations were being made of properties confiscated by the Nazis. No such register was being created according to the response. I’ll leave with this from Vera Schaufeld. Worth listening in full.