She may have received tellybox fame very late in life, but Baroness Trumpington was a huge civic presence in our city. And not just because she is 6ft tall.

I stumbled across this book originally at the height of Lady Trumpington’s late media fame – prior to my interest in local democracy in Cambridge. Its lack of an index and the ‘light’ content as I flicked through it made me think it was ghost-written, so I put it back down. £16.99 seemed steep. Three years later and I stumbled across it in the Oxfam shop on Burleigh Street, Cambridge.  And the book all stemmed from this parliamentary exchange:

Lord King was a huge figure in John Major’s early government in 1990 – appointed Defence Secretary in the run up to the Gulf War of 1991. As a child I remember him being on TV all the time. I also remember reading comments about him in the memoirs of General Sir Peter de la Billiere during my university years a decade later. General de la Billiere was the commander of UK forces in that conflict – personally chosen by Margaret Thatcher in the face of opposition from the military establishment. The legend if I recall correctly is that Thatcher said if she didn’t get her way, she’d appoint de la Billiere as her special adviser on the Gulf and do things that way. She got her way. When the two men first met after John Major took over, King is recorded as saying he intended to be a ‘hands on’ defence secretary – which worried de la Billiere for obvious reasons.

“She stuck two fingers up at the former defence secretary! She can’t do that?!?!”

She did, it was caught on camera and the footage went viral. Suddenly there were celebrity agents everywhere calling on her to turn her into the next big thing. Not long after, she was on Have I Got News For You – see here. There were Buzzfeed articles, broadsheet pieces, and then the ghost-written book.

“I don’t understand all this excitement,” she says. “I didn’t write the damn book, and I haven’t read it either.”

…she said in an interview with the Observer. Which is a shame because as a book aimed at the mass market, it’s quite a good read. Essentially she comes across as the politician you’d want to go out and have a pint with, and definitely someone you would want to have on your side. Even Margaret Thatcher didn’t faze her.

So you can imagine what she would have been like with councillors inside Cambridge Guildhall!

As Mrs Jean Barker, she was elected by the voters of Trumpington, Cambridge in 1963 and remained one of their ward councillors for the next 10 years. She moved with her husband down to London in 1975 when he took up a new post as headmaster of the University College School following 17 years as headmaster of The Leys School in Cambridge, originally founded by Methodists (as the old architecture pays testament to) – today one of the most expensive private schools in the county.

Interestingly, Lady Trumpington was also a governor of two state secondary schools in Cambridge, as well as being on the board of governors of Addenbrooke’s Hospital. Reading with a much closer eye on her years in Cambridge, it seems that Lady Trumpington followed in the footsteps of her predecessor, Mayor Florence Ada Keynes, who was incredibly active and high profile in working for everyone in the city, and was someone who seemed to cross class and institutional boundaries in her work.

In the face of institutionalised sexism

No mainstream political party comes out of the 20th Century with an unblemished record as far as equalities are concerned. The story of how she became the candidate for Trumpington – historically a village just outside Cambridge which has since been absorbed into the city as the latter expanded, is one in the face of grumbling men squabbling about which one of them should be the candidate.

“I lent over and whispered to the woman next to me that I had a jolly good mind to put my own name forward just to keep the peace. The next thing I knew, my neighbour was on her feet saying ‘Mrs Barker would be delighted to stand.’ And there I was: I was the candidate.”

A paper candidate she was not.

“I then of course, canvassed as though my life depended on it. One old man who had voted Labour all his life voted for me because I admired his dahlias so effusively. On polling day, I drove pensioners to the polling station all day.”

Both the above quotations being from Coming Up Trumps, Trumpington J, MacMillan 2014 London.

Her attempt to stand as the Conservative candidate for what was the Isle of Ely constituency, now part of South East Cambridgeshire, was effectively blocked by a sexist party selection committee who, as she states pronounced her name incorrectly over and over again.

“At the end, they said: ‘Why do you think you’re not in Parliament already?’ I said: ‘Because of selection committees like you,’ and went out and burst into tears.”

40 years later, the Conservatives’ selection committee now for South East Cambridgeshire would face a different sort of controversy when selecting their candidate for the 2015 election as Heidi Allen and Lucy Frazer contested that seat. In the end, Lucy Frazer QC was confirmed as the candidate, replacing longtime MP James Paice, while the South Cambridgeshire Conservative Association jumped at the chance of having Heidi Allen representing them to replace Andrew Lansley. Both women were subsequently elected to their constituencies bordering Cambridge City with huge majorities – around the 50% mark.

Lady Trumpington’s mayoralty was at a time of huge change in Cambridge as far as buildings were concerned. She presided over were the Queen Anne Terrace car park that overlooks Parker’s Piece (I’ll try and get one or two photos from the county archives sometime soon – the record is here). She opened Elizabeth Way Bridge, the biggest road bridge in Cambridge City with Rab Butler, by then the High Steward of Cambridge.

There were two other things mentioned in her book that also stand out. The first was her campaigning for a new social centre at Addenbrooke’s Hospital. When it was first built in the 1960s, there was no social centre for staff – a huge oversight when you consider how big the development was – and is. One of Lady Trumpington’s close friends was a former student at Cambridge called Frank Lee. A career civil servant, he rose to become one of the Permanent Secretaries at The Treasury. He had been knighted by the time he took up an appointment to the board of governors at Addenbrooke’s, serving while Master of Corpus Christi, Cambridge. It would have been here that he’d have met and worked with Lady Trumpington, also on the board. It was Lee’s idea according to Lady Trumpington that a social centre should be built – hence it being named after him. They needed £100,000 to build it. Lady Trumpington describes how she wrote a letter to a wealthy friend asking to contribute, and how he turned her down. Not long after, the gentleman’s wife wrote saying she found the letter emptying a waste paper basket and took a different view – enclosing a cheque for £10,000. (Around £130,000 in today’s money). And thus Cambridge got its Frank Lee Centre.

One other thing mentioned in Lady Trumpington’s book was the conversion of Market Square in Cambridge from a car park to a functioning market. For many years in the mid-20th Century the square had been accessible to general motor traffic and was used as a car park. Lady Trumpington describes how she insisted that the square be turned into a permanent marketplace, removing the car park. 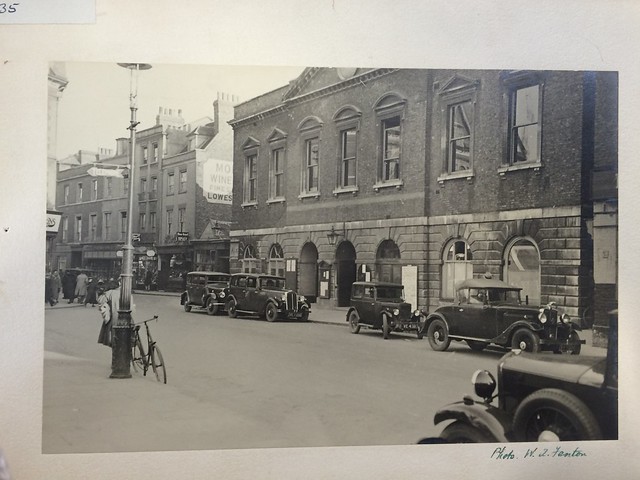 From the Museum of Cambridge – cars parked outside the old Shire House – demolished in the 1930s.

This was also around the time the Lion Yard was being redeveloped – one that included the construction of a new multi-story car park. 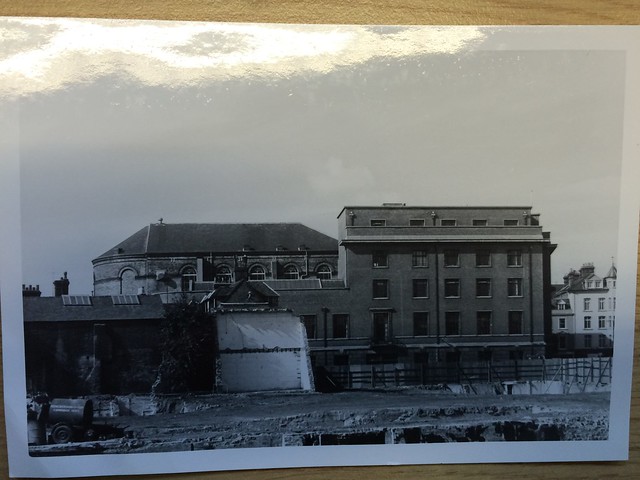 From the Museum of Cambridge, demolition of the south side of Petty Cury to make way for the Lion Yard shopping centre which opened in 1974.

As she mentioned in her Observer interview, her book was effectively ghost-written. That doesn’t automatically mean the book is a poor read. As I mentioned above, Georgina Morley and Deborah Crewe, who are credited in the book in the acknowledgements, have actually done a good job given their commission and target audience. Obviously as a historian and general consumer of really dense (content-wise) books on political history, generally I look for indexes and lavishly scattered footnotes and references. Some of the history books I have acquired over the years dedicate up to a third of the book on references and footnotes alone – testament to the range of archives, primary and secondary texts referred to. With no references listed in Lady Trumpington’s book, it’s difficult to say what other references the writers and researchers accessed/used other than what sounds like a series of extended interviews with Lady Trumpington herself. Hence going through the local archives – in particular the local newspaper archives, may well show that there is far more to Lady Trumpington’s days as a councillor in Cambridge than has been published.

Supporting my future research on the story of Cambridge the town

If you enjoyed this article and are interested in the history of Cambridge the town and the people who made our modern city, please support my research in bringing their records of achievement to wider audiences. Click here if you would like to make a donation or take out a small subscription to support my ongoing work.